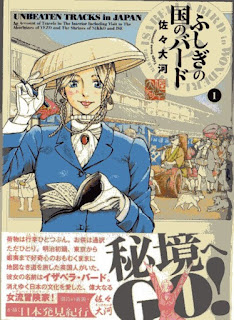 This is a cool little manga. It's the manga version of a book from 1878 written by Scottish adventurer Isabella Bird, who travelled from Edo to the far North of Japan. I'd heard about the book from my guide book to Japan, so when I saw the manga I bought it. I wish they'd have had more volumes as she meets the Ainu in Hokkaido later in her adventures and I would have liked to see that. 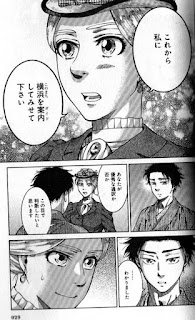 In this first volume she hires a guide and tries to get used to Japanese food as she starts to travel North. 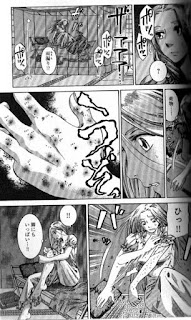 She is attacked by hundreds of fleas while sleeping. She gets over this and starts to enjoy some of her adventures. She makes friends with a young Japanese girl. I liked the drawing and the story was easy enough to follow in Japanese.
Posted by rob jackson at 03:13

How can I buy this? (Living in Germany, but should be able to mail order). So far I've only found it on Japanese Amazon...

I bought it second hand in Japan from a big shop in Akihabara, I don't know where else you could get it.