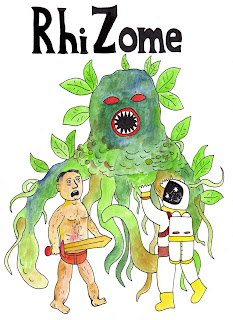 Me and Kyle have renamed our anthology. it was going to be called 'LetterBomb' but now it's called 'RhiZome'. Here's the tumblr with the new name.

I've just finished my story for it today, it's thirteen pages and is part one of a continuing story called 'Corporation Pop'. We are still looking for more submissions so if you'd like to be in the anthology let us know. It's black and white, submissions of four to twelve pages, A4 sized with a vague sci-fi / fantasy theme. Deadlines the 31st of July. Thanks!
Posted by rob jackson at 10:04 No comments: 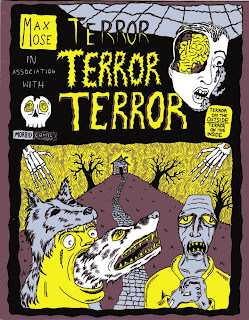 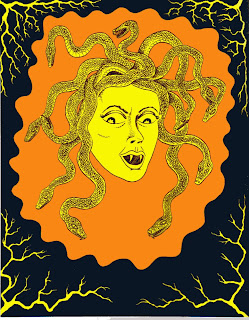 This is a really good full colour comic by Max Mose.     It's got a spooky castle horror tale 'Castle Gorgon', a fantasy tale 'The Cap of the Wolf' and a science fiction story 'Space Terror Maggots'. They're all really good! The colour adds a massive amount to the stories and the drawing is great, have a look at the back cover above.  Here's a proper review of the comic from Rob Clough's High-Low blog. Highly recommended! 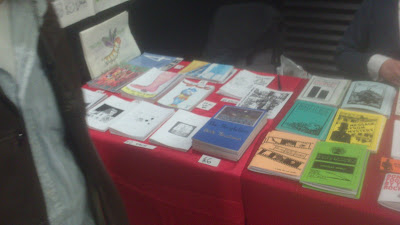 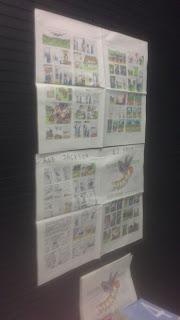 Here's the obligatory photos of my stall at Comica London on Saturday. For this show I went down on the train very early in the morning and came back at night. It was a shame to miss the drinking and talking at night, but I couldn't afford a hotel, plus I had to do a farmers market on the Sunday. I'm very tired now, it was a long weekend.

I was worried about this show after all the news about them not doing any advertising until the last minute, but in the end it went very well. I sold lots of comics and met a lot of people I haven't seen for ages. As there are so many shows now, and its getting difficult to get tables at them, I don't see everyone as often. The show started a bit slow but got really good about one o'clock.

Even though I sold a lot of comics (for me, it's the most I've ever sold at a London show which is cool!) I didn't manage to make a profit on the day due to the price of getting to London and back. If the organisers can announce these shows earlier so I can get a cheaper train ticket I would go again, though I'll probably only do one London show a year. Slightly cheaper tables would help too. 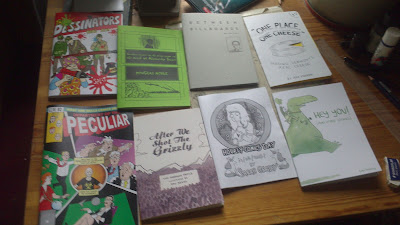 Here's my haul of stuff I bought, traded and was given. I got 'The Dessinators' from Francesca Cassavetti which is the book they did for Angouleme this year. From Douglas Noble I got 'Certain Events in the Years Prior to the Death of Abernathy Saint' which was really interesting and a part of his 'Lives of the Saints' story.
I really enjoyed OD Pomery's 'Between the Billboards - Part One', I'll have to get some more parts of this story as it's really good. Colin from Accent UK kindly gave me a copy of Josh Kramer's 'One Place, One Cheese' about making cheese in Vermont as I am a cheesemonger.
I bought Hirst and Wells 'Department of the Peculiar - Part Two' which I liked a lot. I thought it was better than the first part as the story is getting going now. Sarah Graley gave me a copy of her Hourly Comics Day comic which was fun.
Also I traded my 'California' series with Dan Berry for his 'After we Shot the Grizzly' and 'Hey You' books which were great. I especially liked his sketchbook from Algiers and his 'Grey Man' stories.

Thanks everyone for looking at my stuff at the show! Its all on sale at my website.
Posted by rob jackson at 02:44 6 comments:

Here's a review of the final part of my 'California' series from the Forbidden Planet Blog.
Posted by rob jackson at 01:27 No comments: 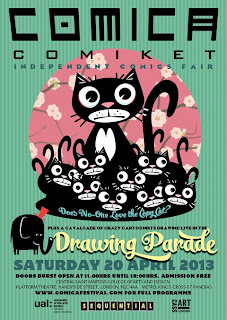 I'll be at the Comica Comiket on Saturday in London. It's 11 am till 7.00 pm, why not come along? I'll have all my 'California' series of comics and lots of copies of my book 'The Storytellers'. And my older comics too.

A Bit from Page Four of My New Story 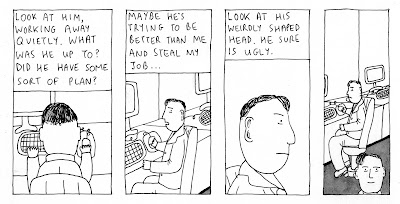 Here's a row of panels from my new story, hopefully it'll be for the Letterbomb Anthology.
Posted by rob jackson at 01:54 No comments: 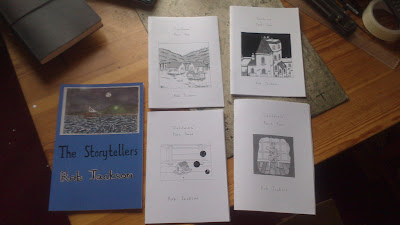 There are lots of new comics for sale in my website shop, why not go and have a look? I've got 'The Storytellers' (my first book with a spine) and 'California' parts one to four (the whole series). Thanks!
Posted by rob jackson at 01:33 No comments: 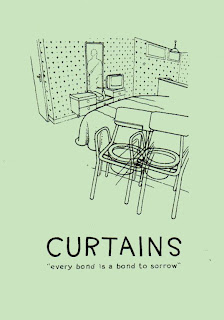 Here's the latest comic from John Robbins. His website is here. It starts with a short story, then a text story and then a really long story for the rest of the comic, 'The Heart Bowed Down by Weight of Woe' which is the best one. It's about a son at his parents house and his mother tells him that his father has just died in bed upstairs. They both keep putting off ringing for an ambulance or a doctor. The mother wants to have some food and watch TV, and the son goes out on a weird kind of date which seems to end badly as he says the wrong thing. There seems to be lots of things going on in the background but none of the characters take much notice. The drawings really great, with strange very cartoony faces on all the characters, which add a lot to the effect. It's a very good story.
Posted by rob jackson at 08:23 No comments: 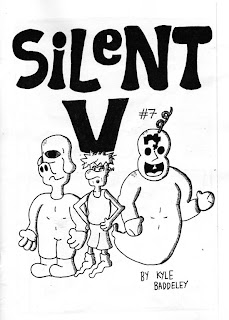 Kyle Baddeley has just released the seventh and final part of his series 'Silent V'. You can get a copy at his website, here.    His drawing has got so much better over this series. This one is full of action as he ties up the elaborate and complicated story of Doug, the aliens and the babies.
Posted by rob jackson at 08:11 No comments:

Here's a little review of 'California - Part Two' from Optical Sloth.
Posted by rob jackson at 01:53 No comments: 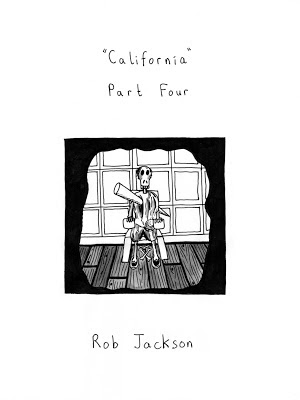 'California - part Four' is now on sale at my website. It's 28 pages long and costs £2.20. Free postage in the UK, please add £2 postage for the rest of the world. This is the final part of my 'California' series. Thanks!
Posted by rob jackson at 03:17 No comments: