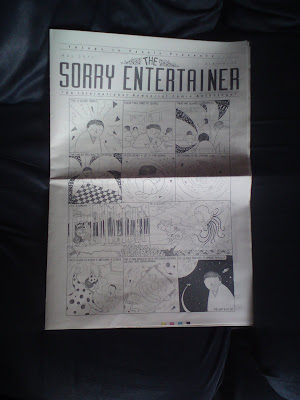 My contributor copies of the 'Sorry Entertainer' newspaper comic have come in the post today. It looks great and has some really good comics in it! If you would like to buy one go to Simon M's website. I'll bring some copies to the Birmingham Zine Festival in July.
Posted by rob jackson at 03:52 No comments: 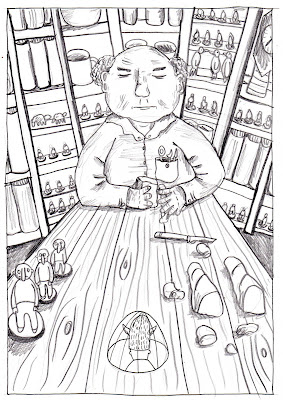 This is going to be page 30 of my new comic. I'm drawing this page all in pencil. It's about half finished at the moment.
Posted by rob jackson at 04:45 No comments:

Chester Brown - Paying for It 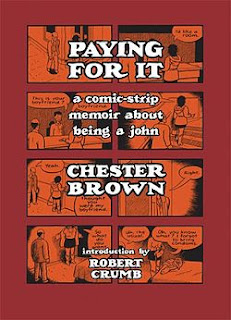 This new book by Chester Brown is very interesting. It's about his many years paying for sex with prostitutes in Toronto. The drawings are a bit like 'Louis Riel' but even more stripped down to the basics. He draws a lot of those black circles round the action, I don't know what they are called, where they are made up of little black lines. The people have very little in the way of expressions and incredibly simple faces. He never shows the prostitutes faces, often covering them with word balloons. It's a long book but only little sized which I thought worked really well. 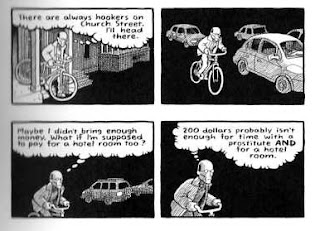 Here's where he first goes looking for prostitutes, riding around on his bike, and worrying. I found a lot of the bits in this book very funny. I'm not sure what I think from a moral prespective, but it did make me laugh out loud a bunch of times, which is rare from a comic. There are some gross bits where he starts going on prostitute review internet sites, and leaving reviews. Those seemed really weird to me, a bit like leaving reviews on Amazon or something.

This also made me laugh as he works out his accounts. He is so logical.

After the cartooning there are a load of appendixes and notes where he sets out his ideas that prostitution is great and romantic love is bad. I liked the notes from Seth (who is a character in the book, along with Joe Matt) who says 'I can't resist noting that the idea of Chester Brown and Joe Matt discussing the nature of romantic love is not unlike two blind men painting a sunset'.

Highly recommended. Even if you hate the whole idea it is very interesting as autobiography.
Posted by rob jackson at 03:09 No comments:

Another Panel from 'Flying Leaf Creature' 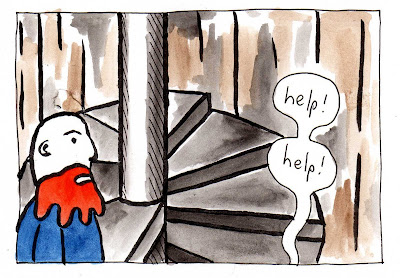 I have drawn some medieval castle style stairs. The bit of paper I stuck on here to cover up my mistakes will be hidden in the final cleaning up of the page. I'm up to page 23 now but this is from page 21 where our heroes stop for crumpets and scones.
Posted by rob jackson at 02:30 No comments:

Julia Wertz - Drinking at the Movies 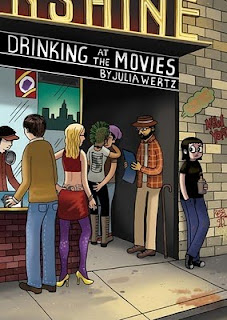 This was a very good book. Its very funny and I have read it four times since I got it about Christmas time so it must be good. It's an autobiographical tale of Julia Wertz moving from San Francisco to New York. There's loads of pages on her website so go have a look. The website used to be called 'Fart Party' but now it's called 'The Museum of Mistakes'.
Posted by rob jackson at 02:25 No comments:

There's not been much to put up on here for a bit... I've done twenty pages of the 'Flying Leaf Creature' story now. I'm thinking about where it's going to go next, it's going to have to be pretty long so it's probably about half finished. Hopefully I'll have it for Leeds Thoughtbubble in November if I can work out how to get it printed.

The 'Sorry Entertainer' newspaper anthology has been totally funded on Indiegogo so thats great! I'm really looking forward to seeing that. It's very hopeful that there are enough interested people who want to fund such an interesting comic.
Posted by rob jackson at 02:55 No comments: