A Little Bit of my Second Ice Cream Comic

I like this little bit of page four of my second ice cream comic. It's weird to be drawing about last Christmas while getting ready for this one.
Posted by rob jackson at 06:42 No comments: 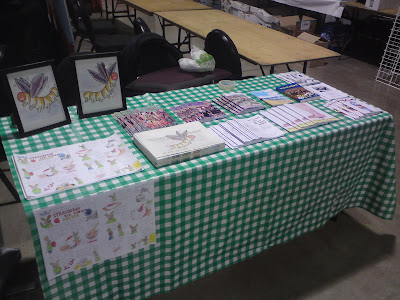 Here's my table at Leeds Thoughtbubble. I took my green checkered oil cloth that I use for selling ice cream at markets. I was going for a sort of ice cream theme because of my new comic. I thought my table looked a lot nicer than usual so I was happy about that. I went to Leeds on the train on Saturday morning so it was a very early start.

The Saturday went really well. My table was in a good place, at the end of a row, with no queue problems like last year. I sold three times as many comics as last time, so I was very pleased. That means I will be going back again next year. Thanks to the organisers, I thought it was very well run. There were plenty of people on the Saturday but it was a bit more spread out, as it was two days long with two halls. That was good as it was easy to walk about and I got to see everyone. I didn't manage to go and look in the other hall as I was stuck behind my table a lot. 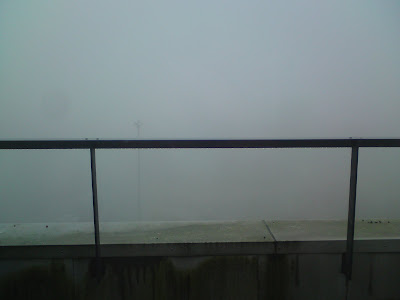 The Sunday was very foggy, and so was I, after the Saturday night party. It was a lot quieter and went really dead after dinner. Maybe it should finish about three on the second day so I can get home earlier. I was very tired but managed to get home by half nine on a very busy train. It was really nice to catch up with everyone that I only see at cons. 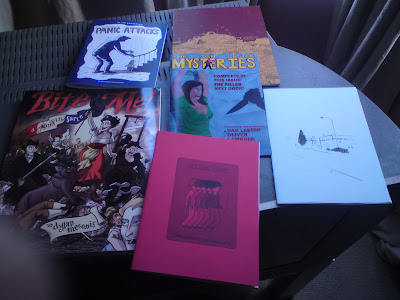 Here's my haul of comics. I got Michael De Forge's 'Lose - issue 3' from Koyama Press, which is amazing. Also I got Francasca Cassavetti's new comic 'Panic Attacks' and Dan Lester and Oliver Lambdens 'The Killer Next Door' which is the new issue in the Dan Lester Mysteries series. I got Simon M's latest 'Smoo #4' comic and Nick Souzek's 'Falling Away'. Also Colin from Accent UK very kindly gave me a copy of 'Bite Me' by Dylan Meconis. I'll have a read of them all tonight. I saw a lot of other great comics which I will be ordering soon once I sell some more soup.
Posted by rob jackson at 03:06 2 comments:

Labels: leeds thought bubble, what i got at leeds

Here's a review of 'It's a Man's Life in the Ice Cream Business' from Optical Sloth. Thanks Kevin!
Posted by rob jackson at 02:03 No comments:

Leeds Thoughtbubble this Saturday and Sunday 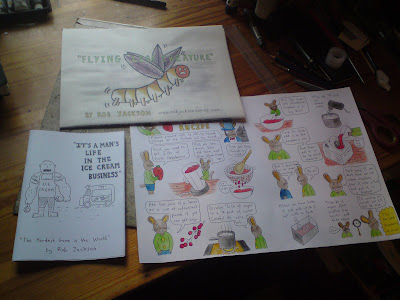 I'll be at table 117 at Leeds Thoughtbubble this weekend. Please come and say hello! Here's a photo of the new stuff I'll have on my table, 'The Flying Leaf Creature' newspaper comic, 'It's a Man's Life in the Ice Cream Business' and my hand-coloured 'Ice Cream Recipe' posters. Hopefully it'll be a great weekend. Here's a plan of the event so you can find my table.
Posted by rob jackson at 02:09 No comments: 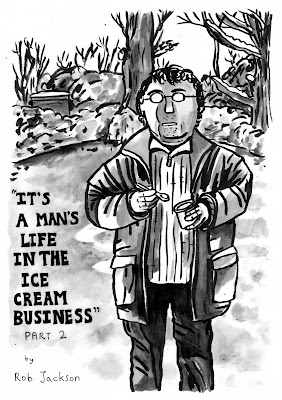 Here's a go I had at drawing a cover for the second part of my ice cream comic. I like it apart from the snow on the floor. Snow is hard to draw in black and white. I'm going to get going on this new comic now.
Posted by rob jackson at 07:29 No comments:

Here's a review of 'It's a Man's Life in the Ice cream Business' from Richard Bruton at the Forbidden Planet blog. Thanks Richard!
Posted by rob jackson at 02:15 No comments:

Here's a very nice review of 'Its a Man's Life in the Ice Cream Business' from Rol Hirst. Thanks Rol!
Posted by rob jackson at 10:15 No comments: 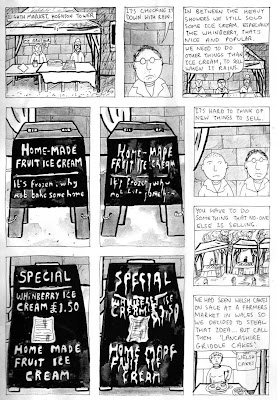 Here's a page from my new ice cream comic as I haven't posted any artwork for a while. If anyone would like to buy it it's for sale on my website, only £1.50.

I haven't been able to do any drawing for a couple of weeks, luckily I've finished everything for Thoughtbubble so hopefully that'll go well. I am waiting to think of a decent idea and suffering with the writers block or whatever.
Posted by rob jackson at 03:04 2 comments:

Rol Hirst - 'Too Much Sex and Violence' 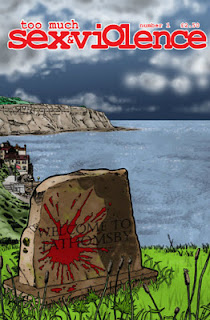 I really enjoyed Rol Hirst's new comic 'Too Much Sex and Violence'. Rol has written it all and the art is by many different artists including Paul Rainey, Andrew Cheverton and Martin Eden. Each artist has drawn a different short story so that works really well as a whole issue. They all tie together nicely and are all set in the small coastal town of Fathomby. There was a good review of it yesterday from the Forbidden Planet blog. It's quite a lot like the 'League of Gentlemen' with a large cast of very weird characters in a strange town, so if you liked that I'm sure you'll like this. I'm very interested to see what happens next as it's a very good start to a new series.
Posted by rob jackson at 04:58 1 comment: