Comics I Got at Milton Keynes Comic Fair 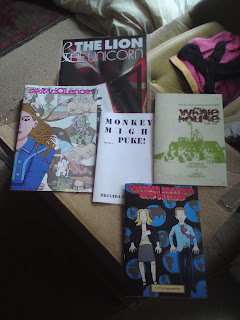 Here's a photo of the comics I bought and traded at the Milton Keynes Comics Fair.
They are (from the top) 'The Lion and the Unicorn - Volume 0' by Ash Pure. This is a very fancy comic all in colour with nice printing, about an alternate reality Britain with lots of psychic powers.
'Too Much Sex and Violence - Issue 3' by Rol Hirst and many artists. This is my favourite issue yet of this series, its getting better as the stories build and I really like the cover.
'Monkeys Might Puke - Volume 2 Issue 1' by Dan Lester. More 'Monkeys Might Puke'! I really like the shitty leprechaun story.
'The Whale House - part 1' by Andrew Cheverton and Chris Doherty. This is a great start to a new series, it's very intriguing. A man called Diggory finds out he was adopted and then ends up at a strange house where everyone seems to know him, but think he is someone else. I'll be very interested to see where this goes next and Chris' drawing is great.
'Thunder Brother: Soap Division - 1 The Apprentice' by Paul Rainey. I like this a lot and even though I've read it all on the internet it's great to have it on paper as it's much more fun to read. I do like things on paper better. The back up stories are good too. 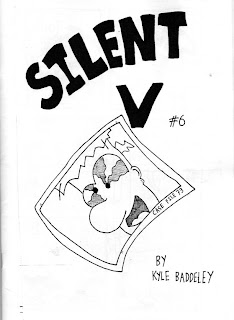 Here's the penultimate issue of Kyle Baddeley's 'Silent V' series. I'm glad to see that he's starting to wrap things up and explain things instead of adding more new characters. There are lots of weird twists and turns still.  The drawing is as good as the last issue where he had improved a lot. I'm looking forward to the final issue and then I'll be able to re-read the whole series. There's another back up strip in here as well called 'Maggot Lump' which is fun. Here's a link to his blog.

There's a new Comical Animal out now with a four page story I drew. Why not go and have a look?
Posted by rob jackson at 11:23 No comments: 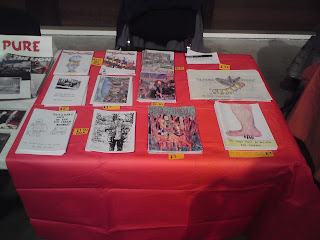 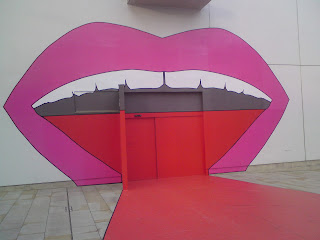 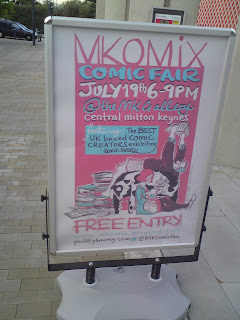 I had a very good time at the Milton Keynes Comics Show. It was in the Milton Keynes Art Gallery where they had a very interesting exhibition of work by Pushwagner. He's a Norwegian artist who I had never heard of before. Its very good stuff.
I sold a decent number of comics and made lots of good swops, I'll write about the comics I got in another post. The show was nice and busy and it was great to catch up with all the cartoonists. Thanks to everyone who bought anything and Paul Rainey for organising the show!

Mardou - The Sky in Stereo 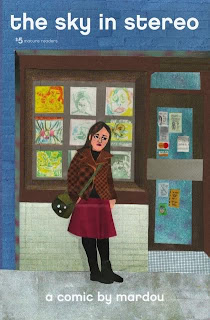 I really enjoyed Mardou's new comic 'The Sky in Stereo'. I'm glad to see its just the first part of a much longer story and Mardou is already drawing part two. I think it will be really a good long story. I will be buying part two as soon as it comes out. It's about a girl called Iris living in Manchester in 1993 and working at a burger bar at the station. She fancies a co-worker called Glen. It's definately worth buying, very highly recommended. It's 52 pages too, so a good big chunk of the story. Buy it here.
Here's a review of it from the Comics Reporter.

Here's a little interview with me by Kyle Baddeley on his blog where he mainly asks me questions about my more fantasy based comics.
Posted by rob jackson at 00:54 No comments: 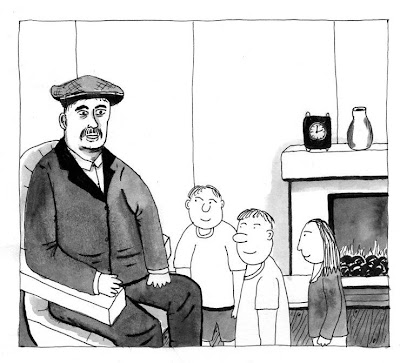 Here's a new drawing I've done today for the introduction page for my 'Jackson Family Stories' or whatever i decide to call it in the end. Here's Robert Jackson telling the kids stories.
Posted by rob jackson at 04:38 2 comments:

Kyle Baddeley who draws 'Silent V' has started a new art blog of his paintings. Here's a link to it, have a look, there's some good stuff.
Posted by rob jackson at 01:44 No comments: 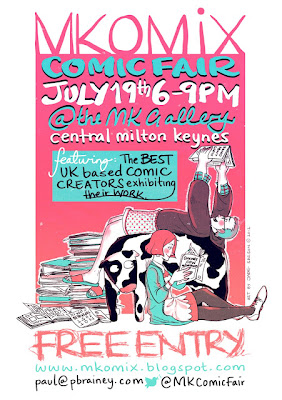 It's the MKomix Comic Fair in Milton Keynes next week and I will have a table. It's Thursday the 19th July 6pm till 9pm. I am excited as I haven't been to a show for ages. Here's the website.
Posted by rob jackson at 02:08 1 comment: 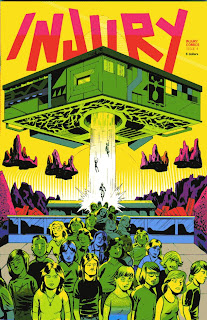 Its ages since I bought a new comic through the post so I was very happy to get 'Injury 4' this morning. The main story is really great, it's called 'A Birdsong Shatters the Still' and is based on a story by Jeff Wilson and drawn by Ted May. Not much happens in it, a gang of kids all in Iron Maiden tshirts get stoned as the sun comes up and then go into an all day detention at school. It's really good though as the boys try and pass the time and survive the detention without being able to speak or make a noise. It carries on from the school stories in the other 'Injury' comics which I have also really liked. You can buy it here.
Posted by rob jackson at 06:11 No comments: