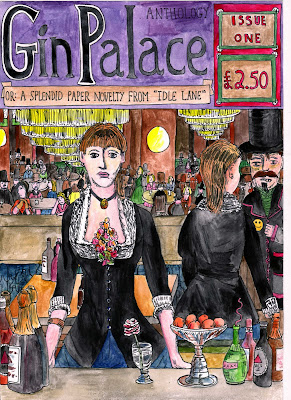 I did a much better scan of the 'Gin Palace' cover so that's good. I found a button on my scanner that turns it from 'home mode' to 'professional'. Wish I'd found that before....

Going to post it to the printers tomorrow morning so tonight is the last chance for anyone to send me more pages. It is 40 pages long, with colour covers. Looks really good! Now I'm going to put all the pages in order.
Posted by rob jackson at 02:36 2 comments:

A Nice Day Out 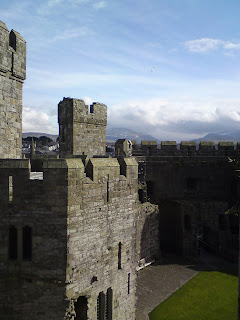 I went to Caernavon today for a day out. I ate fish and chips and then wandered round the castle. It's a very nice place but slightly too far to go there and back in a day. I'm trying to have a day out every week so I don't get too boring. Also it helps me think. 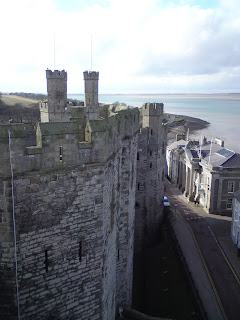 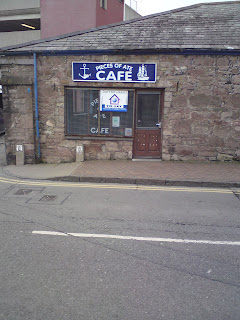 I like the name of this pirate / boat themed cafe near the docks there, 'Pieces of Ate Cafe'. Sadly the locals mustn't have agreed as it's closed down. Would be a good setting for a sea based tale....
Posted by rob jackson at 10:46 No comments:

Labels: I've been wandering about 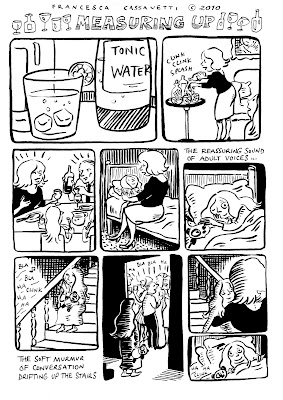 I got another 8 pages for 'Gin Palace' today, a great story from Francesca Cassavetti. The comic is now 39 pages long, all good stuff, so thats awesome! Anyone else, I'd need your pages by weekend... otherwise there will be a 'Gin Palace 2' coming out in time for Leeds (as long as this one sells....) so you can always do something for that.
Posted by rob jackson at 03:10 No comments: 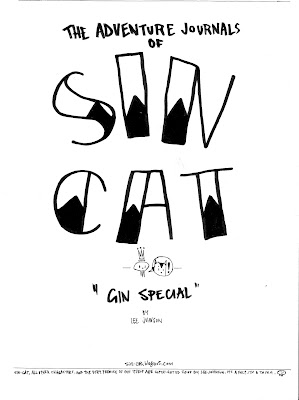 I got a six page story today from Lee Johnson for the 'Gin Palace' anthology. It's very cool! Here's the title page, it's 'The Adventure Journals of Sin Cat Gin Special'. Here's a link to his blog.
Posted by rob jackson at 09:23 No comments:

It's the first birthday of Joe List's excellent The Annotated Weekender blog thing where he draws all over the Guardian Weekender magazine. Lots of people are doing their own annotations and sending them to him, some of them are very funny! I did one too....
Posted by rob jackson at 07:17 2 comments:

'Outlaw Brothers' Lovely 80's Hong Kong action film where everyone fights in Pringle style golf sweaters, smashing each other over the head with their giant mobile phones. Yukari Oshima is the bad ass style police woman tracking smugglers with the help of a car thief. At the end she gets to beat up loads of villainous white guys in some excellent fight scenes.

'Tiger on the Beat' starts out as a very comedy-style police drama but gets really vicious after half way. It's got Chow Yun Fat in it being cool and ends with a great chainsaw martial art battle to the death, need I say any more...

'Chinese Untouchables' is a very depressing film. It's more or less a remake of 'The Untouchables' but try and imagine that where the Al Capone character wins and rides off scot free into the sunset while all the good characters lie on the floor dying in a pool of blood. 'You can never win' he laughs as he walks happily off. I sometimes think I would like to see a film where the baddies win, but in the end they are just very grim when you watch one.
Posted by rob jackson at 06:12 4 comments: 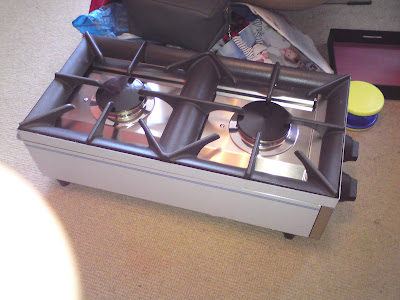 Oooh, the table top double gas hob burning thing has come today for my food business. I am excited again about it now, it's a lovely bit of kit. Very solid and heavy. I am getting inspected in a couple of weeks and then going on a food hygiene course and then hopefully everything will be fine and I can start selling food.
Posted by rob jackson at 05:10 3 comments:

Labels: look at my lovely oven 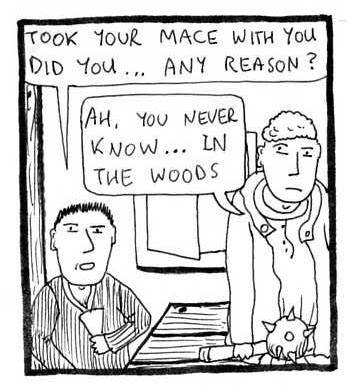 Mace Crime was a great worry in Medieval Times.
Posted by rob jackson at 03:42 No comments: 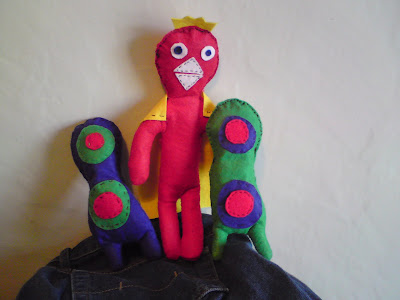 I have made the Peanut Brothers and the hero character (with a cape) from 'Bog Wizards 2'.
Posted by rob jackson at 02:46 No comments:

These badly drawn animals made me laugh, from my new story 'Goblin Hall'. I especially like the cow looking from behind the wall in the first panel. Still needs some grey tones adding, I'm going to do them with my new grey brush pen I got the other week. I didn't know you could get grey ones.
Posted by rob jackson at 09:54 2 comments: 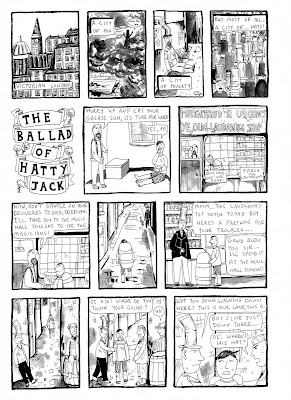 Here's the first page of 'The Ballad of Hatty Jack'. This 11 page story will be my story in 'Gin Palace'.
Posted by rob jackson at 01:53 No comments: 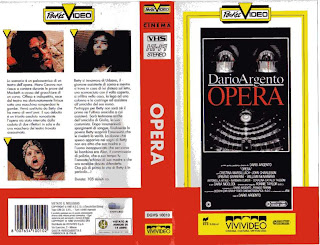 This weeks movie is 'Opera' by Italian director Dario Argento. As I have only seen it in Italian I am a bit hazy on the plot details, but thats not really the point of these 'Gialli' horror fillms anyhow is it. The best bit of the film is the very start. The heroine is tied up and needles are taped to her eyelids so if she blinks they will stab her (its a kind of crazy injury-to-eye motif thing to a silly degree), then her boyfriend comes in and gets stabbed in the throat, going through his tongue in sudden severe close up, and the crazy rock music starts up. Its by one of the Goblins, who are an awesome Italian band who worked with Argento for the soundtracks for nearly all his films. The best of their music is in Suspiria where the whole film seems like an excuse for the great music. I had their 'best of..' album once, I wounder where it has gone, I must go find it. The rest of the film is pretty good, crows fly around, people get done in. This film is from my Video Nasty collecting phase when I was younger. (Never did me any harm...)
Posted by rob jackson at 05:15 8 comments: 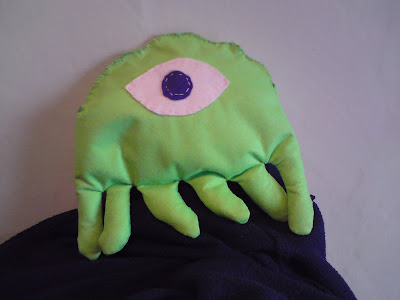 Look what I made today. It's one of the Elder Gods from 'Bog Wizards 2'. I'm going to make a bunch more characters out of felt in time for London. Probably with less tentacles though, they were a right pain.
Posted by rob jackson at 06:48 1 comment: 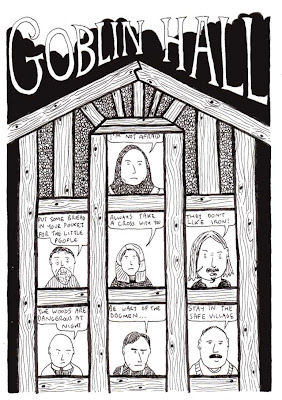 I finished 'Peas to Andromeda' yesterday so I've started a new story 'Goblin Hall'. Here's the first page for now...
Posted by rob jackson at 05:43 4 comments: 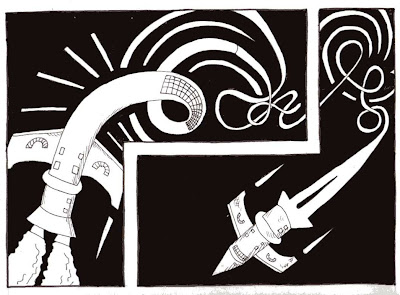 Here's a peek at a couple of panels for my new science fiction short story - 'Peas to Andromeda'. It will be 7 or 8 pages long. I think I'll put it in my next comic which will probably be made up of various short stories.
Posted by rob jackson at 08:26 No comments: 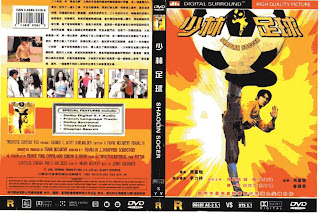 This weeks film for Friday is 'Shaolin Soccer'. This is easily my favourite football based film of all time (second is 'Escape to Victory').

My friend Erik sent me this from Shanghai and I was very pleased with it. First have a look at the case. The dodgy makers have been lazy on the back of the DVD and stuck on the credits for the movie Patton with George C Scott, and below that the plot synopsis of the film 'Monkeybone'. That's cool already.

It's a very funny and top quality film, I've only ever seen it in Chinese, but I think that's better as English subtitles would take away from the madness of it all, and I've avoided the dubbed version that came out a few years later with added British football jokes, bah. The clash of good and evil between the two football teams in their final game is astounding, and it has a classic ending. Highly recommended.
Posted by rob jackson at 06:29 4 comments: 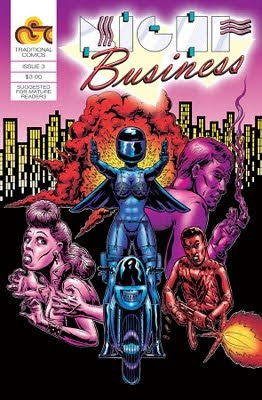 Another excellent issue of 'Night Business'. Buy it from Benjamin Marra here...
There's loads of action in this issue as 'The Rider' starts patrolling the night, looking for justice, and Johnny is captured by Donny the Pimp and taken to the generic dockside warehouse. Donny's dozens of goons are waiting for him in the warehouse to get their revenge. Some great dialogue, and awesome fight scenes. Top class, very highly recommended, and once again a great author bio and picture.
Posted by rob jackson at 03:27 No comments: 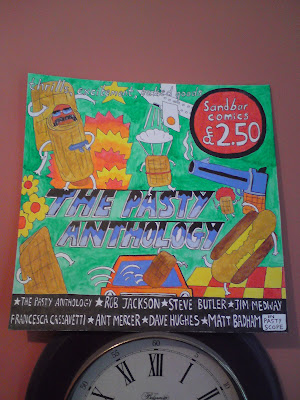 Here's a poster I made yesterday in order to sell 'The Pasty Anthology' at the Sandbar in Manchester. I was thinking of them Bollywood posters where they paint all scenes from the movie. Also kind of 80's action movie ideas. I like it.

The Pasty Anthology is also for sale in my shop....
Posted by rob jackson at 06:48 2 comments: 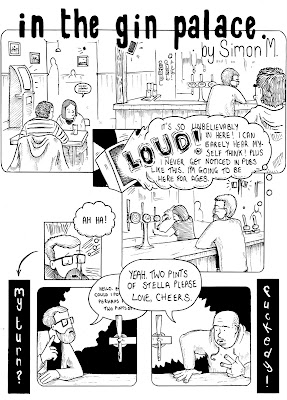 I've got three more pages in for 'Gin Palace'. They are from Simon M. who does 'Smoo Comics'. Here's the first page. He also did a guest strip at the Daily Crosshatch.
Deadlines still end of February for anyone else who wants to be in it, I've got 25 pages now but would like it to be nice and long.
Posted by rob jackson at 03:48 2 comments: