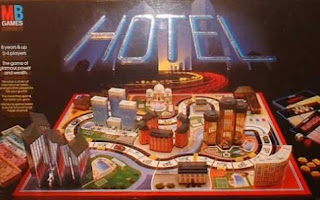 I've got a new computer now as the old one was really old. So sometime over Christmas i'm going to have to redo my website robjacksoncomics. It needs doing anyhow as its got very sprawling and confused over time.
Had some ideas for Bog Wizards 2, but haven't been able to start it yet as I have to do an exam for my boring day job. That will be over with next week so I can get drawing again. This ones going to come with a board game...
It wont be quite as fancy as Hotel 'the game of wealth, power and glamour' but it should be pretty good. I always liked making my own board games when i was little so it should be a good laugh.
Posted by rob jackson at 05:21 No comments:

Lynda Barry - What It Is 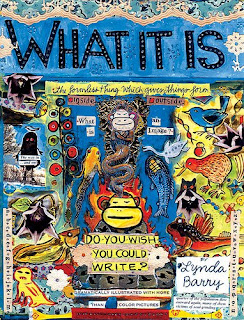 Lynda Barry's 'What it is' is a very nice book. Its all full colour and full of collage and cartoons. It is the essence of her creative writing course she has been teaching, and all her ways of keeping writing when worrying about what she is doing. I've been after this for ages, I think it would be a great book to read if you were suffering from the dreaded writer's block, like I was in the summer. There are some great games to play to get yourself writing that Lynda has found very useful. The best one seems to have one page in front of you to write the story on and another page to draw spirals, doodles, eyes and stuff to keep yourself going. She wants to always keep the pen moving so you don't come to a stop and don't try to work out if your writing is good or bad, it's just writing. I think all the rules of writing will also apply to cartooning, no problems. Also there are loads of questions, what is an image, what is a memory. There aren't really any answers, just questions to make you think and get you going. A lot of it is like beautiful poetry, with all the random words and collage on each page. Highly recommended.

Francesca Cassavetti has put a nice review of '8 Stories' up on her blog
fabtoons blog
Posted by rob jackson at 03:59 No comments: 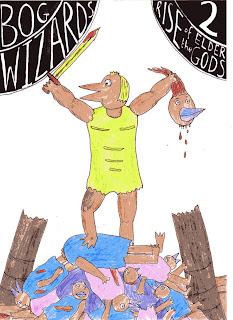 My plan is to do this comic over christmas. It should be a good laugh to draw. I will have to have another mini mini comic inside it again, but I don't know what that will be about this time...
Posted by rob jackson at 05:24 No comments:

And then i'm doing Leeds Thought Bubble on Saturday 15th November. What a busy month it'll be. I won't have time for any drawing at this rate.
Posted by rob jackson at 05:10 No comments: 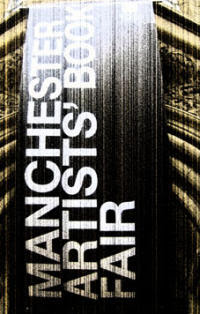 I'm sharing a table at this on November 8th in Manchester.
More details here-
http://www.artdes.mmu.ac.uk/rightonpress/bookfair/
Posted by rob jackson at 04:08 No comments:

I’ve got a lot of books from D & Q recently, their new autumn books are very good.
Here’s another one, the third in the series of Moomin books.

I like these books, I used to read all the moomin books when I was little and always liked them, so its no wonder. They have a lovely expressive swooping kind of pen line, and the stories make me laugh. Well worth getting if you have fond memories of the moomin’s or are a fan of newspaper type cartoon strip stories. The best thing is the unique character design.
Posted by rob jackson at 03:58 No comments:

I’d only read one Guy Delisle book before which was ‘Shenzhen’ his book set in China. I’ve only got it in French too so I’ve really only looked at the pictures. I liked the drawing in that one better than this new one really. Shenzhen is all drawn in charcoal and big smudgy black pencils whereas this one is much more clean line looking and finished in ink and pens, he must have changed his drawing style over the 8 years or whatever it has been between the two books. My favourite thing in Shenzhen is that he stays in a hotel in Shenzhen identical in every detail to a hotel I stayed at in Shanghai and drew in my ‘Train to Shanghai’. They must be mass produced in China. I was going to call my comic ‘Shanghai’ until I saw ‘Shenzhen’ just before I finished it and decided the name was too similar…

‘Burma Chronicles’ is a very good book though, in this one he is not working as an animator abroad but instead is accompanying his wife who is working for Medicins sans Frontiers as an aid worker in Burma. He doesn’t have that much to do except look after his little baby and draw his graphic novels when he gets the chance. He does a good job of showing how weird it is to live under a secretive and repressive dictatorship where you never get anything explained, it’s just ‘do this’. All of a sudden while they are there, the capital of Rangoon is moved to a new capital hundreds of miles away with no warning and no explanations of why. The regime is constantly making things difficult for the aid workers who are trying to distribute medicines.
Posted by rob jackson at 06:14 No comments:

Rutu Modan - Jamilti and other stories

This is a new book by Rutu Modan, it is a collection of earlier stuff than Exit Wounds. I really liked Exit Wounds but I thought this book was even better. The art work is awesome, much more texturely interesting than Exit Wounds and very beautiful. I can see why she went with a more simple artwork on Exit Wounds so as not to draw attention away from the story but its great to see her using all kinds of art materials, collage, pencils and whatever else works here. Nearly all the stories are in full stunning colour, except for one in black and white which is strangely smudgy, which I thought worked well. I really enjoyed this and highly recommend it to everyone. My favourite story was one set in a theme hotel.
Posted by rob jackson at 04:05 No comments: 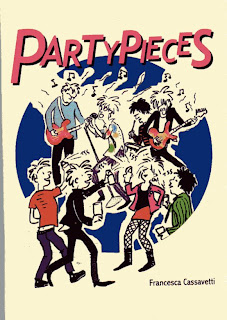 Like it says on the first page 'Three stories, all loosely about parties and mostly true'. Another excellent comic from Francesca. 'College Party' about being at college and being a punk, 'Small Talk' about being rubbish at parties and telling people you are a cartoonist and their usual stupid replies (i've had lots of people want me to draw them as caricatures too, its very embarassing) and 'The Death of Cool' about a 50th birthday party. Highly recommended.
fabtoons 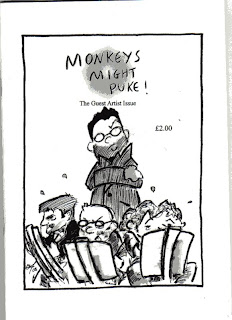 Bought this at Birmingham and it actually made me laugh properly which is rare for a small press comic. It is very funny. This time Dan Lester has got lots of other artists to draw his strips, its a good idea, but I hope he does some of his own drawing too soon. Bringing loads of comics out so quickly is great though and can only be a good thing.
My favourite story is 'Some Common Dreams and Their Meanings'. And then 'The Amazing Adventures of Werner Herzog' is second.
Posted by rob jackson at 05:33 No comments:

You can see my comics on the Secret Acres table at SPX last weekend on Neiljam's site here-
neiljam
Posted by rob jackson at 04:30 No comments:

Birmingham was very disappointing this year. I did ok on the Sunday, I would have been happy with the amount of sales and interest my comics got for a normal Sunday at Bristol, but I did really badly on the Saturday. I was ill all weekend with the flu which didn’t help but it just wasn’t worth the effort and cost of going. The venue and everything was great and for once it wasn’t too hot. It was also nice to catch up with lots of people and meet some new ones. Went for a good balti too on the Saturday night.

I think mainstream Comics Festivals just aren’t the right audience for my stuff, they sell much better to non comic fans than comic fans who just don’t seem interested at all. Most of them don’t even look at my stuff. I always do all right at Bristol though, I don’t know what the difference is…

I’m still going to Leeds next month which should be ok as its so cheap to go to, and will be worth it just to meet people and have a laugh, but I’m going to have to have a big think about where to try and sell my comics. If I didn’t go to conventions at all I would make money on the comics instead of losing loads of cash just to sell a few copies. I’ve sold lots at Travelling Man in Manchester and to America this month so maybe I will concentrate on that.

Secret Acres had my comics at SPX the same weekend so I’ll see how they went on selling them there.
Posted by rob jackson at 08:10 No comments: