'Flying Sausage Academy 4' off to the Printers

I've just sent 'Flying Sausage Academy 4' off to the printers. It is the final part of the series, I think it wraps things up nicely. Here's the finished front cover. 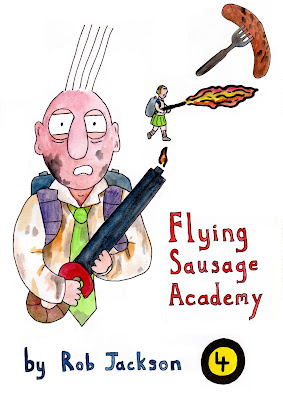 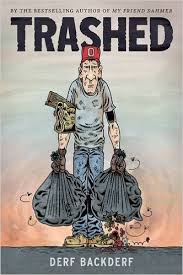 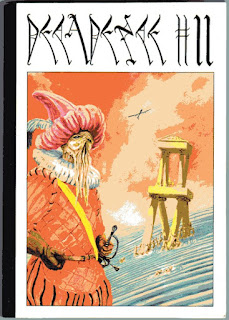 It's a book length anthology of weird science-fiction comics. It's very good. I particularly liked 'Eclipse 2056' by Inechi, with its Starbucks sponsored lunar eclipse, and 'Modern Box' by Lala was cool too. There's a lot of very different drawing styles and ideas throughout the book. It's for sale here.
Posted by rob jackson at 06:22 No comments:

Here's the first row of panels of my new short story, 'What We Talk About When We Talk About Plinkity Plonky Plink'. Needs more pencils on these panels yet, I think.
Posted by rob jackson at 00:26 No comments:

Here's the short story I drew the other week. It was rejected but I'm not surprised, I only found out about the anthology I submitted it to on the very last day, so I had to rush it. I was going to leave it, but than I had an idea so I thought it was worth seeing how it would turn out. I am drawing a new four page story for submitting to 'Dirty Rotten Comics' this week, it's much better. 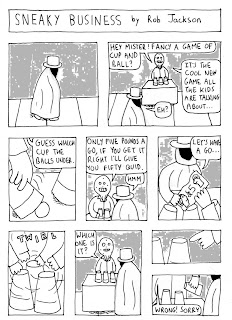 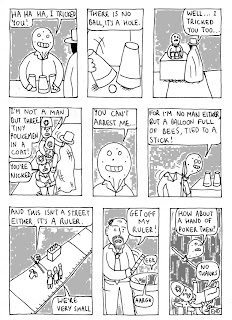 Here's a new review of 'Flying Sausage Academy 1' from Optical Sloth.  Thanks Kevin!
Posted by rob jackson at 10:46 No comments:

Here's a couple of panels from another short story I've drawn. I'm trying to draw stuff to submit to all the anthologies I can find. I think it's a good way to get drawing again. Later this week I'll start scanning and cleaning 'Flying Sausage Academy 4' and then I can send that to the printers.

I'm not going to any more comic shows this year so if you want to get hold of some of my comics the best way is to visit my website. Thanks!
Posted by rob jackson at 00:56 No comments: