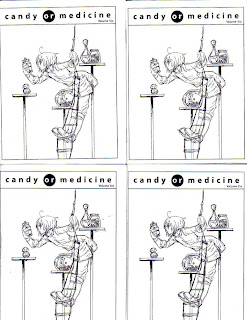 I got some copies of 'Candy or Medicine 6' today, it's a very nice looking little anthology. I like how my vending machine story looks at such a small size, nice.

I have written a 4 page story that i'm going to draw next month and submit for the UK Comix and Web Thing anthology. It had to be on the theme of Mars which baffled me for a while. In the end I have decided to try with a special 'Bog Wizards' extra story called 'Under the Sign of Mars'.

My comics are now on sale behind the bar at the Sandbar in Manchester City Center, thanks Sandbar!
Posted by rob jackson at 01:49 No comments:

Josh Blair's anthology Candy or Medicine is up to issue 6 and I have a one page story in it (about a vending machine). It's out now.. have a look at Candy or Medicine
Nanniebim has done the cover for this issue.
Posted by rob jackson at 04:59 No comments: 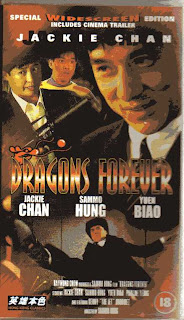 I watched this tonight for the first time in years. It has an awesome end battle in a warehouse which makes you feel very sorry for the stuntmen.

My copy is subtitled very oddly into English. The best bit is at the very end of the film where a reflective Sammo Hung turns to camera and says wisely 'And you thought I was gabby bag. Wake up kids!'

Could this be the best last line in cinema?
Posted by rob jackson at 13:53 No comments:

I ordered this ages ago and it finally turned up the other day which was nice. It's a book of David B's dreams from 1979 to 1994 that he finished drawing in 2005. The drawing is stunning looking and the colouring is great, its coloured in dark blue, light blue and a brownish grey with loads of thick blacks. I always liked David B's drawing style and it has got better since 'Epileptic'.

Well worth buying and highly recommended as long as you like dream stories. I hope a book of David B's non dream stories comes out in English next as I haven't seen anything new of his since 'Epileptic'.
Posted by rob jackson at 04:25 No comments:

There's an interview with me by Matt Badham up at Bugpowder - my first long interview
bugpowder link
Posted by rob jackson at 14:03 No comments:

Just got a letter today from Secret Acres saying they won't be able to publish my proposed book (a big collection of my earlier stuff all re-edited and re-drawn). It was meant to happen in 2010. I've been looking forward to it for years now... I am gutted. It's because of the recession and the economy in the USA. They reckon they would lose money on it and can't afford it now. Sounds like they are having trouble keeping their day jobs and stuff over there so I don't blame them. They are going to keep selling my minicomics anyhow, which they have done a very good job at.

There goes my big comics plan. I've told loads of people over time as well, so i'll have to tell them all that its knackered now. The thought of the book has kept me going through many years of boring jobs and depressing comic sales. Now i'll have to think of something else to go for.

I have thought of an idea for my next comic so I'll be starting that soon, once I recover.
Posted by rob jackson at 09:44 2 comments: 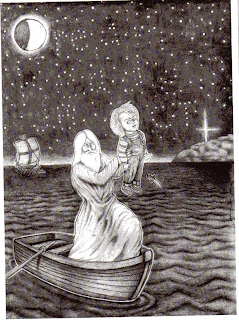 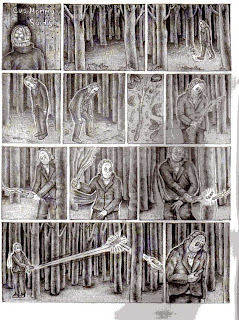 John Brodowski has just sent me the latest in his Curio Cabinet series. It really is very beautiful. He is in that giant Kramers Ergot 7 book, and I reckon when he gets a book out it'll be on lots of people's best of the year lists, his drawing is awesome.

This one has 2 one page 'Cos Mommy Said So' stories with Jason in, 'Miners Refrain' which shows the life of a miner from being a boy to being an old man, 'Illustrations of the Passions and Episodes in the Life of the Wandering Jew' which is a group of double page spreads which are really lovely and 'Hunter' which is really hard to describe, but has two stories going at the same time, one in the left side of the pages panels and one in the right. The drawings great, all done in pencils which gives great effects. He draws excellent forests.

Very highly recommended, get it from Secret Acres
Posted by rob jackson at 06:12 No comments:

Happy Birthday to Me... 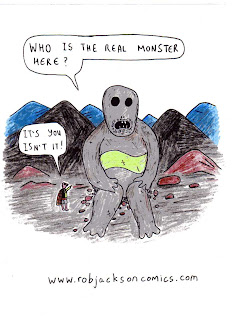 It's my birthday today so I got up nice and early and have finished Bog Wizards 2. Here is the back cover. I'm not going to get it printed for a bit yet as I want to make the board game that goes with it. It's 28 pages long.
Posted by rob jackson at 05:31 2 comments:

I don’t think I’d recommend this to anyone as they would think I was a bit wrong, but I did like it I think.

It seems like the cartoon equivalent of a comedian like Jim Jefferies or Frankie Boyle (if they were a 1970’s avant garde type Japanese cartoonist published in Garo... hmm) its very sick but funny.

Nemoto draws in the heta-uma (or bad is good) style of manga, that was invented by King Terry in the 1970’s, it’s a very weird style if you are not used to it. It also looks a lot like those strange Japanese salaryman cartoons with bald miserable business men drawn with thick black pens. I think “bad” drawing can be good, and what is good drawing anyhow, it seems a bit of an outdated concept to me, like with fine art, so I like the drawing.

The main story is a very sick and twisted story about a giant mutated sperm, born when a sailor is wanking on a boat when a nuclear test is suddenly carried out nearby, and his depressing life. The sailor brings him up as his son. Its strangely logical and sensible, with a lot of melodrama, a bit like a very weird tv soap opera. The story seems made up as he goes along but its exhilarating the way he pulls it all together at the end. It is very very filthy though so that’s a warning. 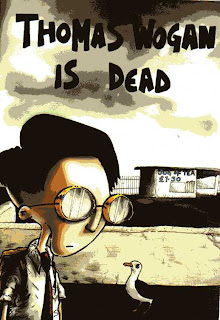