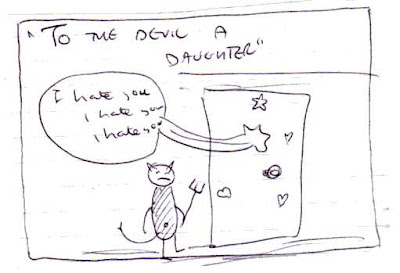 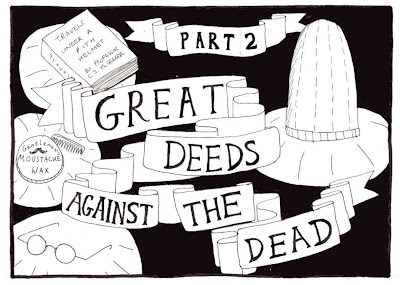 All the drawing is done now, I am up to the boring stages of rubbing out all the pencil lines, then fixing all my mistakes. Then I am going to add the grey tones... it'll be a couple of weeks yet. This is not the cover but half of page 7.
Posted by rob jackson at 11:41 2 comments:

Hello... i'm thinking of doing a new anthology, I think it'll come out twice yearly (in time for the UK Web Comix thing and Leeds...) anybody interested? I'm thinking no theme this time just good stuff. I'll have some time on my hands next year so may as well have a go at doing it more reguarly and see how it goes.

Can anyone think of an awesome name for a new anthology? Free copies of it for life is the prize. I'll have a think myself too, but names not my strong point.
Posted by rob jackson at 04:40 18 comments:

Hurray! I have written the ending for 'Great Deeds 2'. Now I just have to draw the last 5 pages, then clean them all up, add the grey tones, scan them and get them printed. It's not going to be for Leeds, instead I'll bring it out in December. I've still never took 'The Pasty Anthology' or 'Great Deeds 1' to a convention myself so I want to try selling them instead of rushing this new comic out. I'll fix up some mistakes too and do a proper job.

It's a relief to get the ending in right as I didn't know how it was going to go, only in a vague sense, and it's a bit of a risky way to draw comics. It stops me getting bored though. I hope it's not how everyone was expecting it to end....

I can't show any as it will give the story away but I should have the cover to show in a week or two...
Posted by rob jackson at 10:31 2 comments: 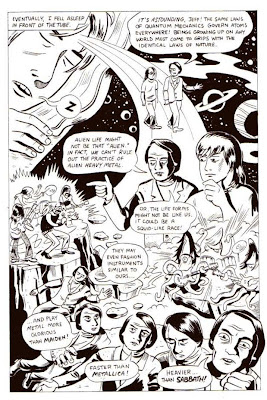 Yay! Another awesome issue of Ted May's Injury Comics. My favourite story is once again the story from Jeff Wilson's heavy metal school days written by Jeff Wilson and drawn by Ted May. This one is called 'Burnout in the Cosmos', there's a cool page from it above. Jeff has trouble thinking of three things he is thankful for after he is placed in In School Suspension for fighting. The other stories are great too. Ted chucked a copy of the Simpsons Halloween Special (review here from CBR) in with the comic as he wrote and coloured a story for it, it's very good too. Buy Injury here... 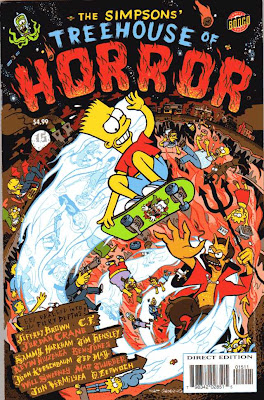 I liked this interview with Benjamin Marra who does 'Night Business'. I'll have to get me some of those...

"indie comics don't always have to be indulgent, pitying, self-analyses of despair, sadness and self-importance. There's a broader spectrum of emotions and story ideas out there I'm trying to explore in comics, like, lust, rage, revenge, violence, street justice, drug abuse, nudity and sexiness."

Link found on the excellent Comics Comics website.
Posted by rob jackson at 04:14 No comments: 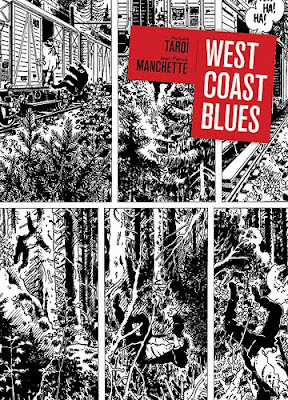 This was a good laugh. I’d never read any Tardi before so I ordered this one when it came out from Fantagraphics. There’s another book too but that ones only for sale in the USA for copyright reasons.

It’s very French, and very seventies too in the drawing style… I think it’s because of the rounded cloud like speech bubbles. It reminded me a bit of the Coen Brothers in the story, something like Fargo. I think it’s the ordinary people getting caught up with violent murderers theme. The violence in it is very sudden and brutal but very cartoony. It takes you by surprise when it suddenly breaks out. He draws lovely lumpy people that I really like and great scenery. There are some very funny bits, especially the scene when the hero is explaining to a woman he’s just met what has happened to him.

The only thing I didn’t like about it too much was the way all the people’s and brands names were in capitals throughout the story. I’m sure they were like that in the original French version but I wasn’t sure why. It just bothered me for some reason while I was reading it as it pulled you right out of the story. I suspect it was done to make the story seem more cold and distant, more like reporting on the facts afterwards. It was an interesting effect anyhow.

I’d like to try some more Tardi, maybe his ‘Adele Blanc-Sec’ series as I like the look of the heroine. I’ll get some next time I’m in France. 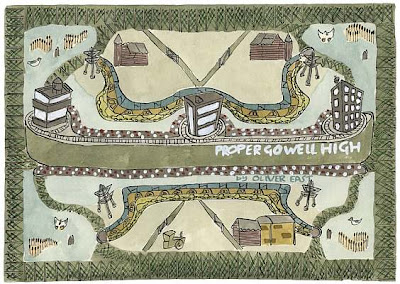 This is Oliver East’s second book. It’s really good. There’s a fancy review of it here from Richard Bruton.

Oliver spends a lot of time trying to draw things in new ways, such as wind and rain. I really like the way he draws wind in this book, as little spirally things. There are some very beautiful pages in here, especially the buildings in Manchester near the start and the pages where he draws paths going round buildings on otherwise white pages. Those are really good. Some of the pages are really hard to decipher as to what they are, it makes you slow down when you are reading it so it lasts a good while. There were a few I couldn’t work out at all but not very many.

I’m looking forward to his next book which is set in Berlin. I’ve never been there so there won’t be any of the pleasure of recognising things I get from his other stuff but I really like his idea of getting other artists to draw the graffiti on the pages, so that should be cool. 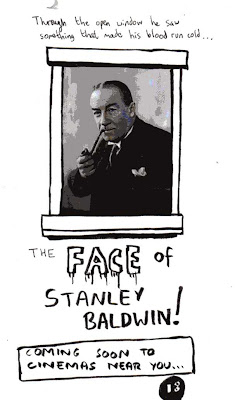 Labels: if you give me lots of money i will make this awful film, terrifying cinema 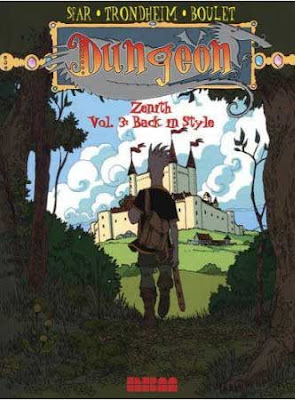 Here’s the third part of the main Zenith story from Dungeon. It’s been ages since one of this part of the series has come out so it’s good to see what happens next. Zenith is set at the height of the dungeons power in the middle of the many stories set at different times.
Boulet is doing the art for this book, I hadn’t heard of him before. It’s really great drawing as to be expected, it took me a little while to get used to the different way he draws the characters. The faces are all quite different. The violence level seems to have gone up a bit in this book with loads of fights and brutal deaths of the many hordes of enemies, also loads of lawyers have appeared! Brrrrrr.

In this book the Keeper has to take out a massive loan to pay for his wedding to Princess Isis. Herbert the duck runs off with her and everyone chases after. The Keeper defaults on his loan and everyone is kicked out of the dungeon which becomes the property of the scheming Delacourt (previous owner of Herbert’s magic sword). Hmm, this is sounding very confusing but it’s a really complicated plot. In the second half Herbert has to return to his home city of birds, which he is banished from on pain of beheading. He goes under a magical disguise which gives him ‘The Face of Death’.

I still really like Dungeon. It is very very enjoyable and fun to read. 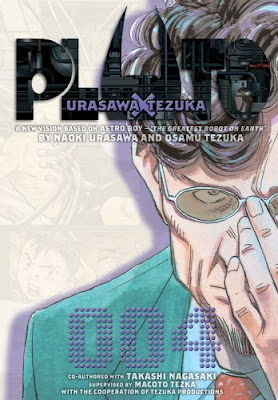 Now I’m up to part four of this series. I’m still really enjoying it, it’s very addictive. Luckily no more are going to come out till next year so I don’t bankrupt myself buying them all at once… I’m not quite as keen on it as ‘20th Century Boys’ (his other series) but it’s still really good, pop type entertainment and something I really enjoy reading. The series is zooming along showing new robots in each volume and the plot is crackling along too. 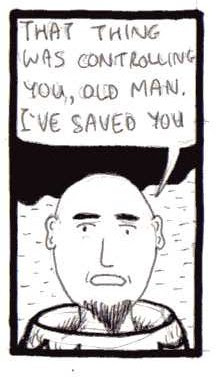 I've been very busy this week doing lots of drawing for 'Great Deeds Against the Dead' Part Two. Here's a panel from page 24 that hopefully doesn't give too much away. It's getting very long, I'm going to try and make it end at 32 pages with printing on the inside covers too.
Posted by rob jackson at 12:04 No comments: 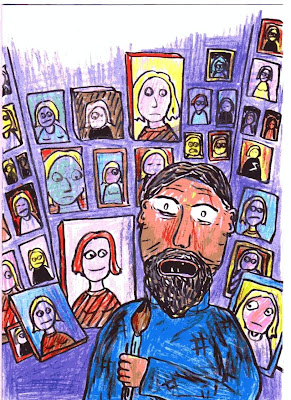 Here's a drawing I did of Tisdale Carnegie. I call it 'In The Artist's Studio'.
Maybe I'll use it for the back cover of 'Great Deeds 2'.
Posted by rob jackson at 14:27 1 comment:

I made an online preview for 'Great Deeds Against the Dead - Part One' at myebooks.

New review of '8 Stories' from Midnight Fiction here.
Posted by rob jackson at 02:07 No comments: