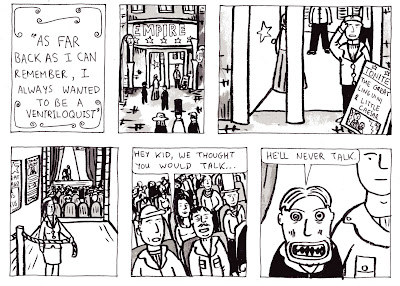 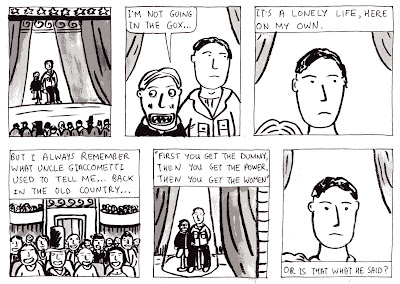 I woke up in the middle of the night and wrote down this one page story. Click on them to see them bigger.
Posted by rob jackson at 06:29 6 comments:

I took some copies of 'Gin Palace 2' and 'Bastards' to the new 'Good Grief' shop yesterday. Why not go and buy some?
Posted by rob jackson at 03:41 No comments:

Not One For Knocking On #1 Exhibition

Yesterday I went to see Oliver East's exhibition 'Not One For Knocking On #1' It was a very good exhibition with four artists in a room in an interesting old mill. 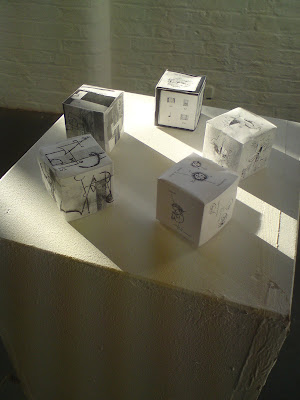 Warren Craghead was my favourite of the artists. Here are some cubes he has made that you can download on the internet and print out yourself. They are from different times, like one says 1970, one says 2030 and so on and show things from his life at the different times, like being a kid or being very old. He also had some pages from his very interesting books. 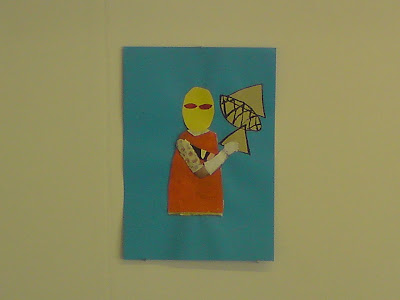 Craig Atkinson runs 'Cafe Royal' books. He had some colour pictures in the show. Here's one of them. Reminded me a bit of David Shrigley. 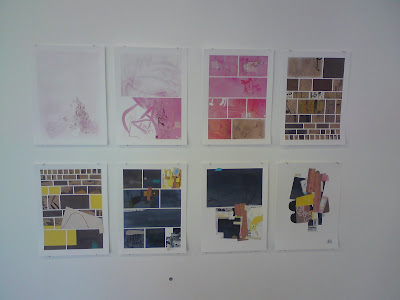 These are Warren Craghead's pages from that 'Abstract Comics' anthology that Fantagraphics brought out. 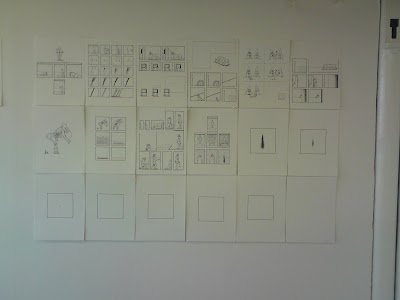 Malcy Duff had drawn this sequence of pages specially for the show. Some of the pages are drawn on really intricately with clear varnish. They are hard to see unless the light is shining on them right, they are the pages on here that look blank. This was my favourite thing I have seen from Malcy Duff. 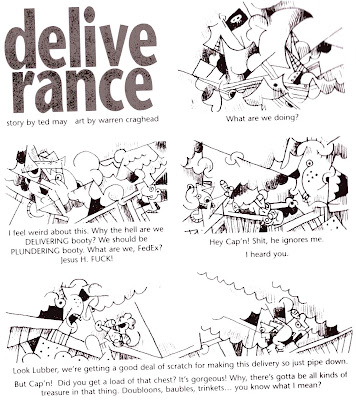 I thought I had something by Warren Craghead on my shelves, here's a bit of a story he drew with Ted May that I have in an old SPX Expo 2000 book.

Blaise Lamee had done a funny internet piece called 'Tintin in China' that was on a laptop. Apparently he has given up doing physical work. I liked his pages from the catalogue.

Not One for Knocking On #2 sounds cool too, with Frank Santoro and John Porcellino, so I will go and see that in February. The catalogue for this exhibition is very good, most of the work in it is not in the show so why not buy one from Oliver or from Good Grief.
Posted by rob jackson at 03:23 2 comments: 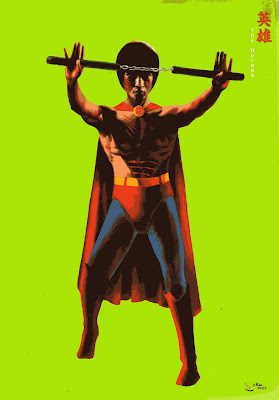 As it would have been Bruce Lee's 70th birthday today I thought iId post up the cover of this cool Korean Alternative comic anthology. Cool, eh. It was a good anthology too.
Posted by rob jackson at 03:27 No comments:

Lots of Comics For Sale in my Shop 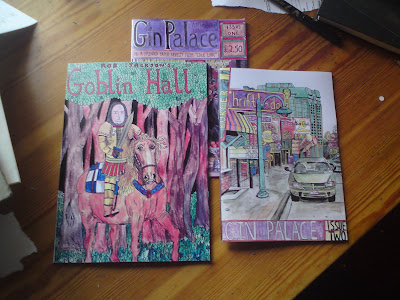 Just a reminder that there are lots of comics for sale in my online shop at my website. Such as 'Goblin Hall' £3, 'Gin Palace 1' £2.50 and 'Gin Palace 2' £3. All with free postage in the UK and Europe, or just a pound postage to anywhere else in the world.
Posted by rob jackson at 03:17 No comments:

New Back Cover for 'The Gods Must Be Bastards' 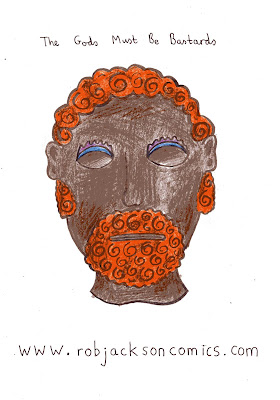 This is going to be a new back cover for 'The Gods Must be Bastards'. Can you tell I've been watching that series on the Ancient Greeks on the tele? (Actual picture is better than this poor quality scan)
Posted by rob jackson at 04:09 No comments:

Haul of Stuff from Leeds Thoughtbubble 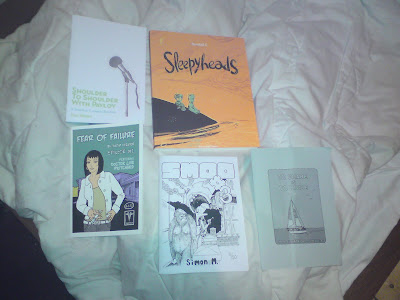 Here's my haul of stuff from Leeds. I mostly got them by trades, except for the fancy 'Sleepyheads' book from Blank Slate. I haven't read that one yet, I had a flick through and looked at the drawing but it needs closer inspection...

the timing (sorry couldn't resist that bad joke), I kept flicking about a bit when reading it as you do with comics, maybe one picture a page would make it more like standup, or some sort of heavy grid pattern. It's very interesting to think about and a good comic.

I also got Thom Ferrier's 'Fear of Failure' about Doctor Lois Pritchard about her having a hard time as a GP in a small Welsh town. I liked the pages with loads of tiny panels to show the days passing with all the hundreds of patients, and I really like the heavy black lines Thom draws round the characters. I'll be interested to see what happens in the next part.

I got Simon M.'s 'Smoo #3' which is the best Smoo Comic yet, I thought. Well worth going and buying.

Lastly I got Nick Soucek's 'To Share is to Divide' which is a cool little comic with nice grey tones. I like his character design too and it's a good story.
Posted by rob jackson at 11:28 No comments:

Labels: what i got at leeds

I met a lot of cool people I've been talking to on twitter and by e-mails that I hadn't met before in person such as Simon M, Nick S., Dan Berry, Thom Ferrier and lots of others and traded a pile of comics for some really good looking stuff in return. I'll have a read of it next week. Also it was great to see Colin Mathieson again from Accent UK who I haven't seen for a couple of years.

The after show party was once again very good and a lot of fun. I stayed in the Jurys Inn which was handy and alright. It was a very long day as I had got up at quarter to six and went to bed at half two.

Yesterday I was thinking I won't go to Thought bubble next year, but now I am changing my mind, though I'm not sure about it becoming a two-day festival. I've always liked the fact you don't have to work the day after the party. It is still very well run and organised and a good laugh.
Posted by rob jackson at 12:00 No comments:

Hmmmm. The first thing to say is that my sales were shit. Really bad. The worst sales I have ever had at a convention. I'm not sure why.

It didn't help that Richard 'Elephantmen' Starkings had the table next to mine and at various times his queue of people waiting for signings stood across my entire table. I don't mind this for a bit, but after about 30 minutes I became pissed off. There was literally not enough of a space for even the tiniest of passers by to reach my stall. I asked him to move the queue but he just looked grumpy and said 'Go and get one of the Thought bubble staff to move them'. From this I deduced that Richard 'Elephantmen' Starkings is some kind of a cock. It's your queue, move them out of my way. It would be easy to ask them to move slightly, and it sounds much nicer coming from him instead of me looking mean to them. I went to talk to the staff who were very helpful as usual and then I had to moan at the queue until they moved. It lost me an hour of possible sales. I probably wouldn't have sold any more but it did put me in a bad mood for quite a while. I know there was very limited space at the show and it was very crowded but this kind of thing can easily be avoided by other stall holders being decent and showing some respect, even to small press people.

-coming soon - the rest of my report which is a lot better
Posted by rob jackson at 11:25 8 comments:

I'll be at Thought Bubble this Saturday selling all my comics. I am excited, it's been ages since I've been to a comics convention. The last one was TCAF, back in May! I'll have my new comics (never before sold at a comics convention) 'Goblin Hall' and 'Gin Palace 2' and all of my back catalogue. Hope to see you there! 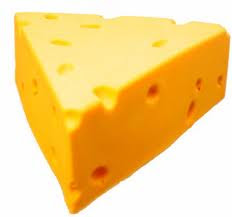 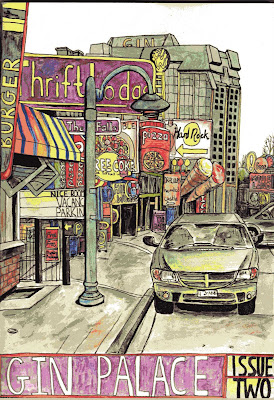 'Gin Palace 2' is just back from the printers now. It looks great. You can buy it from my website shop here or from me at Leeds Thought Bubble on Saturday. It is £3, with free postage in the UK and Europe. Please add one pound postage for the rest of the world.

I'll send out the contributors copies tomorrow, except for the people who are at Leeds. I'll bring your copies along then, to save a bit of postage.

Annie Koyama from the wonderful Koyama Press has just paid for my table at the London Comics and Small Press Expo. I am very touched, how kind is that! Thanks Annie!
Posted by rob jackson at 02:50 1 comment:

A True Story of Inter-dimensional Travel 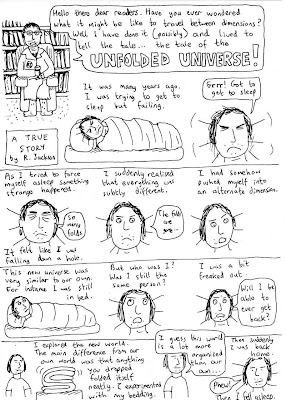 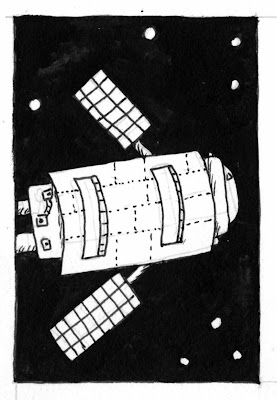 I've finished my 'Correction Robot' space story. It's eleven pages long. I don't know what I'll do with it yet, might try to put it in an anthology.

'Gin Palace 2' should turn up from the printers at the end of this week, so it will be in time for Leeds Thought Bubble.
Posted by rob jackson at 06:41 No comments:

I'm going to be at the Manchester Artists Book Fair tomorrow if anyone is wandering past. I don't know if I'll be there all day, Firecatcher Books have kindly offered me a little bit of their table to sell a few comics. I'll have some 'Bastards 2', 'Goblin Hall' and 'Great Deeds against the Dead' for sale.
Posted by rob jackson at 05:04 1 comment:

'Train to Shanghai' now on Myebook

'Train to Shanghai' has nearly sold out again so I thought I'd put the whole thing up on Myebook so that anyone can read it. I don't think I'll reprint it. The scans aren't cleaned up or anything but it's all readable.
Posted by rob jackson at 07:31 No comments:

Here's a few more panels from 'Correction Robot', my new space story. I'm up to page 8 now, it's going pretty well.
Posted by rob jackson at 06:07 No comments: