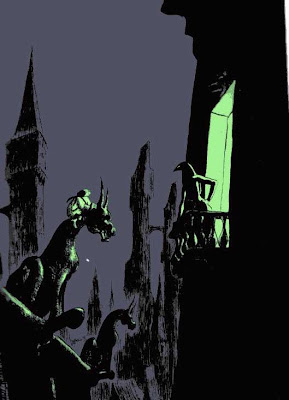 This is the darkest and most cynical of all the Dungeon Series. Hyacinthe, who will become the dungeon keeper in the later series goes from being a courageous hero and defender of the weak and powerless to being a bloated murdererous assassin. We get to see all the things that made him into the cynical dungeon keeper of the later books. The art by Blain (see above) is very dark with awesome use of different colours on each page to set the mood. It's very enjoyable especially if you have read the later books and want to know why things are like they are. The books really build up together into an amazingly complex world.
Posted by rob jackson at 10:48 No comments: 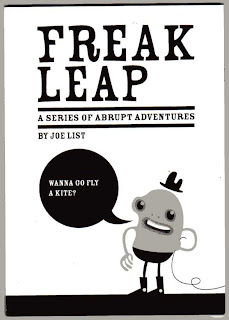 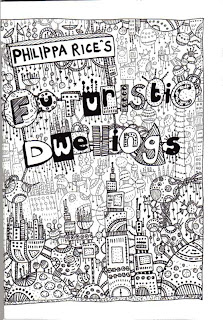 Joe List's 'Freak Leap' which is very funny, and you can tell he has spent ages working on it to get the images just right, and Philippa Rice's 'Futuristic Dwellings' which consists of many super detailed pages of futuristic homes. It's very cool.
Posted by rob jackson at 10:25 1 comment: 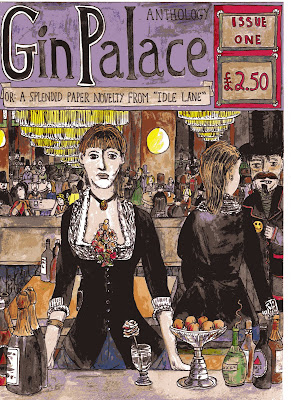 Here's how the cover looks at the moment, needs a bit more sorting out on some of the colours but it's very nearly finished. It's my cartoony version of a painting by Manet.
Posted by rob jackson at 04:01 5 comments:

After lengthy consultations I have decided that the anthology will be called ‘Gin Palace’. It still has no theme and will be black and white with colour covers. I have been drawing the fancy cover all week, it is very fine arty (pretentious moi?) and Victorian looking. I’ll put it on here once it’s done.
Posted by rob jackson at 04:02 3 comments:

Ha ha I have quit my job. I am leaving on New Years Eve. Don’t worry, I’m not trying to make a living from comics but instead am starting up a small travelling food business to sell food on markets. Sounds a nice change to me. In the summer I will make ice cream and in winter I will be cold in a field making curry.

I should have way more time to make comics properly so expect many more comics from me next year. Or maybe the same number but better drawn…
Posted by rob jackson at 04:01 8 comments: 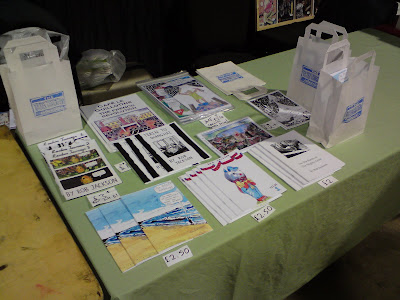 My stuff all spread out before the con starts... 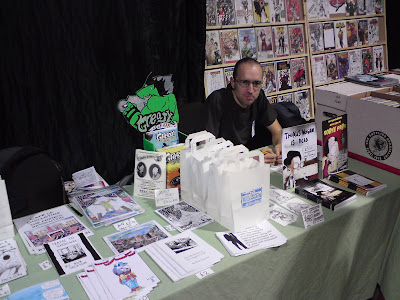 There's Dave Hughes and you can see MD Penman's fancy 'Greasy Joe' stand in the middle.

Yay had a very good time at Leeds Thought Bubble 2009. I was sharing the table with Dave Hughes and also sub-let a little bit of it to MD Penman for his Greasy Joe comics. I got the train there in the morning so it was a very long day, up at 6. Sales started well until 1 but then there was a big gap when I started to get a bit worried. But then some heroic fellow came about 4pm or so and bought a pile of comics cheering me up greatly, thank you! I was pleased as I had covered table costs. Sales were a bit less than last year but still best sales of the year. There was a lot of great stuff on people's stalls, I bought a few comics which I will mention on here once I've read them.

The after show party was a good laugh and I even had a dance at the comics disco which had some very good tunes. I was suffering a bit at first afterwards with crazy staring con eyes but the magic powers of beer relaxed my eyes and they gradually returned to normal. I was very rough on Sunday as I slowly got the train home via an odd and unexpected route.

Thanks to everyone who bought my comics!

NEWS- Ant Mercer is doing a work themed anthology, here's a link to it if you fancy submitting some stuff.... sounds cool. The Brave Brave Idiots 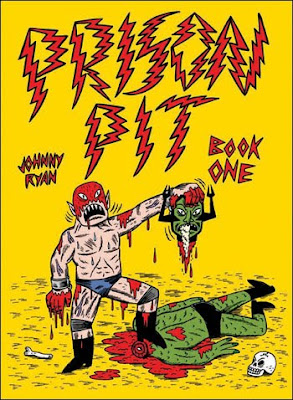 Yay! I was looking forward to this and it didn’t disappoint me at all. Its very cool, go and buy it, all the good reviews of it are true. A brutal maniac is dumped on a prison planet and proceeds to meet and fight the inhabitants in various long and disgusting battles. Awesome. Each baddy has there own special moves, involving snot, jizz, growing extra arms and heads. It’s very manga-esque in it’s long and elaborate fight sequences and also in the pacing. I am well looking forward to issue 2. It is my favourite Johnny Ryan thing I’ve seen though I like a lot of the Blecky Yuckerella strips and fondly remember his ‘Every Autobio Comic Ever Written’.

Thought Bubble 2009 Getting Very Near! 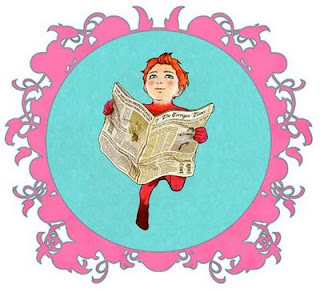 It's really not long till Thought Bubble on the 21st of November. I am looking forward to it. I will have loads of comics to sell, including some at special discount rates specially for Leeds. Come and buy some if you are there. I am sharing a table with Dave Hughes. Should be good. I am all ready for going as I am very organised this year, so no rushing about necessary.

Hurray! It's finally finished. It took me ages and ages and ages to clean up all the pages but now I have burnt them to a disc so they are off to the printers tomorrow. Too late for Thought Bubble of course but they should be on sale after the end of this month...
Posted by rob jackson at 12:07 No comments: 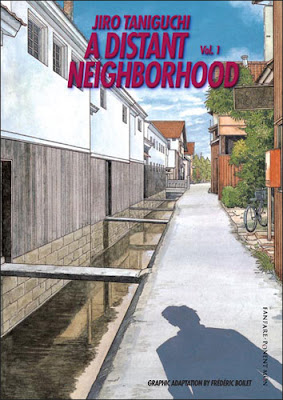 These were very enjoyable to read. I ended up reading them both in one go to find out the mystery at the end. The art is beautiful as you would expect from Taniguchi, very detailed and with a great sense of place.

It’s a time travel / body swop story were the middle aged hero gets drunk at his mothers grave and suddenly finds himself back in his 14 year old body in the past. Once he gets over his confusion a bit, he likes being young again, having loads of energy and life. Also with his adult memories he finds all the classes easy, which is very different from when he was young and they were a hard slog. He starts changing all the things that happened when he was young, now he is dating the most beautiful girl in the class who he didn’t dare approach as a child…

Then he remembers that his dad left them without saying a word at the end of the summer holidays when he was fourteen and tries to find out why he left, and stop him if he can.

I liked these books a lot more than ‘The Ice Wanderer’ which I read last year but my favourite Taniguchi is still ‘The Walking Man’ so read that first if you are only going to get one of his books to try. 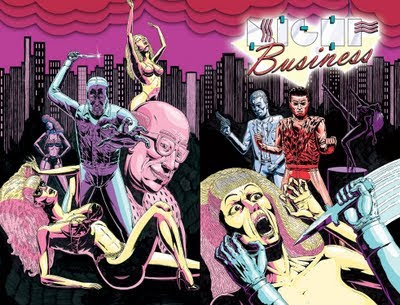 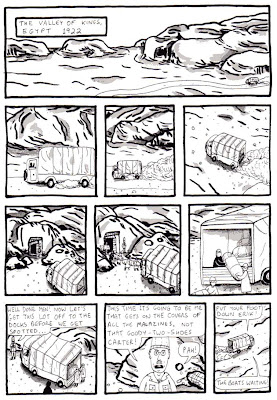 I didn't get much done tonight as i started drinking some Lambs Navy Rum. Here's the first page of 'Great Deeds 2' with the grey tones added. This is page 3 confusingly. Only 28 more pages to add grey tones too.
P.S. I am excited about GRINDER!!
Posted by rob jackson at 14:08 2 comments:

Great Deeds Against the Dead - Part Two Cover in Progress 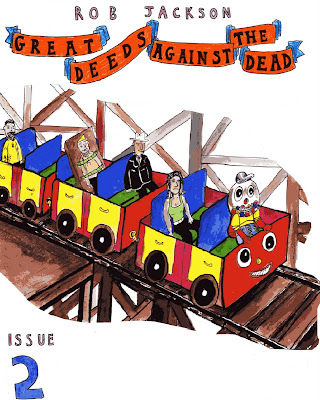 I have been working on the cover all night, needs more messing with yet.
Posted by rob jackson at 13:10 No comments: 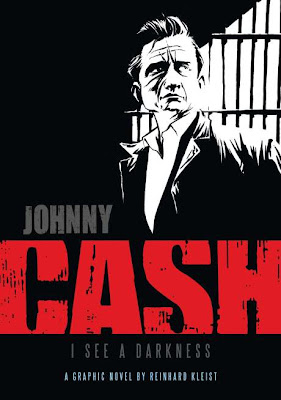 Woah, the drawing in this book is lovely. It’s really great. The story seems familiar ‘cos I’ve seen that ‘Walk the Line’ film and lots of documentaries about Cash over the years, but the drawing really makes the book. My favourite bits are his trees, they’re amazing. He’s very good at the faces too and I like the way he illustrated the songs. It took me a few goes to get into it but it was worth the effort as I really enjoyed it in the end. I think the book gets a lot better after the first couple of chapters, especially the bits were he goes to Folsom Prison to play his famous concert. 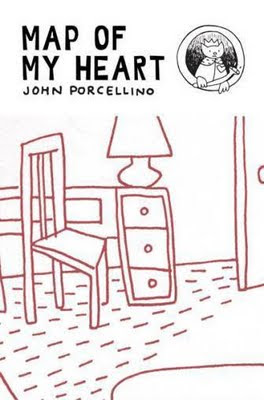