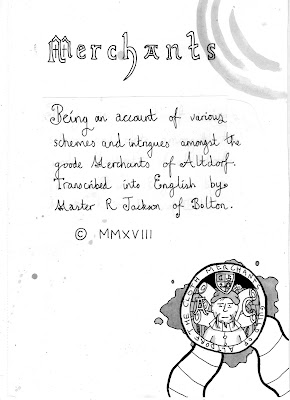 Here's the title page for my new comic 'Merchants'. I've not cleaned it up yet. This comic will be out some time early next year. I've not been doing much on my comics for a while as I am very busy with Christmas Farmers Markets and trying to make some money.
Posted by rob jackson at 01:27 No comments: 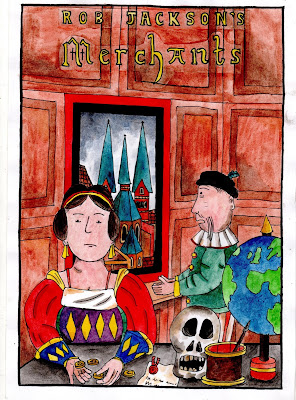 Here's the new cover for my Hanseatic comic that I've been working on. It is now called 'Merchants'. i've not cleaned it up yet. It's a bit different than the old cover, and has an added skull and straighter cathedral roofs. Next job is writing and drawing the title page.
Posted by rob jackson at 03:21 No comments:

Last week I spent editing my comic in progress. Here's some cut scenes. I only cut out one page as the rest of it seems to fit together nicely. I changed a lot of the words though. I found a lot of missing beards and trousers that needed colouring in grey. I'm doing a new cover this week and trying to decide on the name of the story.
Posted by rob jackson at 03:20 No comments:

November Deal - Free Copy of 'The Storytellers' With Any Order

The November Sale is finished now, thanks everyone!


Hello! I've got too many copies of my first book length comic 'The Storytellers' in boxes in my bedroom so I'd like to give some away. Until the 17th of November I will give one free copy of the book away with any comics order from the shop on my blog or from my Comicsy shop. Free postage in the UK, for the rest of the world please add £3 to your order with the button at the top of my comics shop. Cheers, Rob. 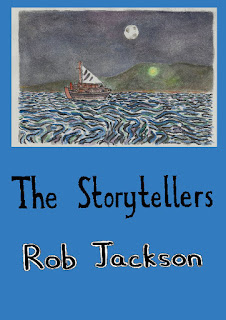 'The Storytellers' is an 80 page book, halfway between A4 and A5, black and white with colour covers. It tells the stories and myths of the Jackson family.

Review from Rob Clough at High Low-
The Storytellers is a labor of familial love, as Jackson weaves together family vignettes stretching over two hundred years. The story begins with Jackson’s great-grandfather (also named Robert Jackson) as a boy, just after his mother had died. He was sent to live with his grandfather in his pub, who comforted the mourning lad with tales from his days as a smuggler. He told stories about his father being shot at by Americans during the War of 1812 and having his ship confiscated by them, as well as a story about his grandfather in Canada, trying to hike his way to New York after abandoning the British army. It’s one of many colorful tales of Jackson run-ins with authority, including an uncle who was nearly executed in Chile, a relative who had to skip town after dropping some concrete on a cop, a female relative who skipped out on her husband to run off with a colorful salesman, a great-grandfather who drank way too much, another relative who demanded that that the men of his family have a drink and remember him at every pub en route to the cemetery (only to be thwarted by the women of the family who changed the route to avoid pubs), and a grandfather with grim war stories.
Structurally, the book (it’s a beefy 75 pages) is fluid in its storytelling, jumping back and forth in time in a way that makes sense. Jackson is careful to establish key members of the family and then work forward and backward as the focus switches from young Bob Jackson to his descendants. What I like best about this book is that these are clearly treasured family stories passed down as part of a tradition of pub storytelling. Jackson clearly put a lot of thought into how to properly record these family stories in print for posterity in a way that made sense and paid proper tribute to the best of the storytellers. It helps that the family has no censor whatsoever, relishing their scrapes with the law and their adventures just outside it. Despite that craziness, one can also sense a long tradition of love, support and continuity in the Jackson clan; despite the misadventures of many children, they were always welcome back. This may be my favorite of Jackson’s comics; it has the flourish of his fantasy stories with the unvarnished truth of his autobio.
Posted by rob jackson at 01:15 No comments:

We've just got back from a little holiday in Salerno near Naples in Italy. We went to Pompeii and to Paestum to see some Greek temples. Back to editing my Hanseatic comic once I've recovered and caught up on the admin. Here's a few photos to have a look at. 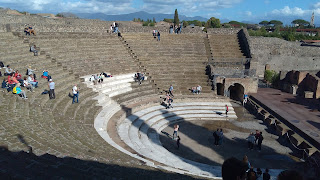 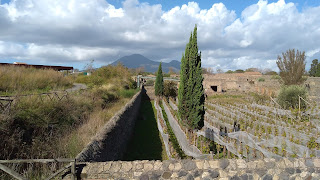 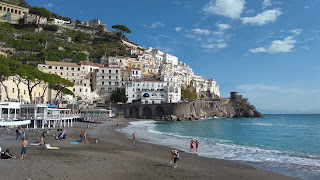 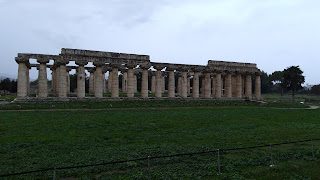 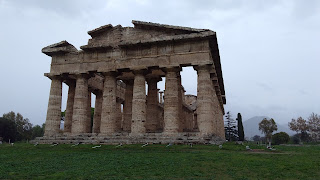 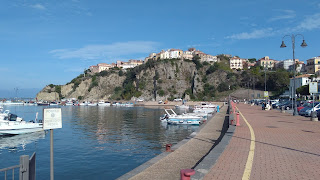