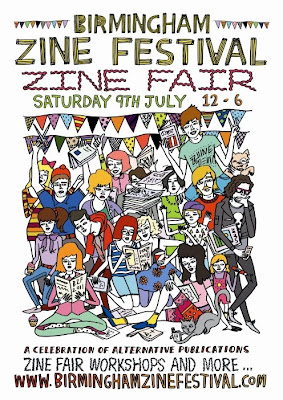 I'll be at the Birmingham Zine Festival next Saturday. I'll have all my latest comics and some copies of 'The Sorry Entertainer' newspaper anthology for sale on my table. Why not come and say hello.

Todays' the MCC Big Drink and Draw so I'll be there from 4 in the Sandbar. (see post below).

Lots of little comics festivals at the moment aren't there. I want to sell a few comics to motivate myself a bit extra to finish 'Flying Leaf Creature'.
Posted by rob jackson at 01:55 No comments: 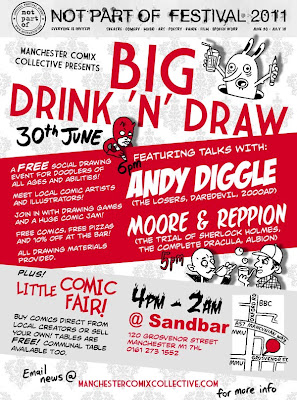 I'll be at this next Thursday selling my comics. Why not come along if you are near Manchester, it sounds cool. Here's a link to more information.
Posted by rob jackson at 09:39 No comments: 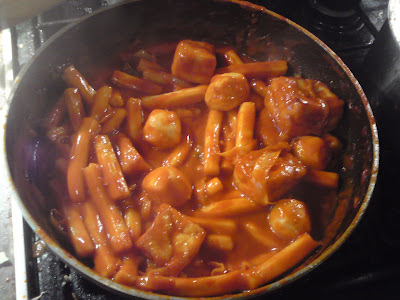 For many years I have had a dream, which was too once again eat a particular very hot Korean street food. I had it ten years ago in Taejon and have very fond memories of drunkenly eating loads of it at a little street stall. It's my favourite street food ever.

Last week I found it was called Duk Boki (by searching on the internet, why hadn't I done that before?) so I found a recipe here, and made it for my tea tonight. It was very nice, and tasted pretty much as I remembered. I changed the recipe a bit by adding some deep fried tofu, green peppers, thai fish balls and a bit of shredded cabbage. It's not exactly the same as I remember of course, the main difference is I had no beer.
Posted by rob jackson at 10:57 3 comments:

Labels: elaborate tea because I have lots of time on my hands, food business 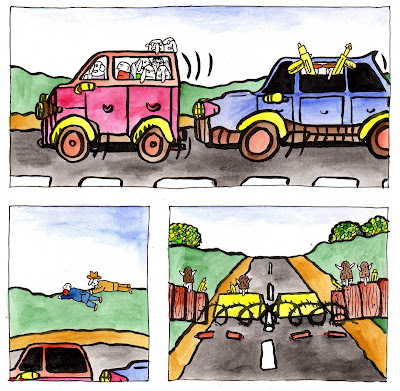 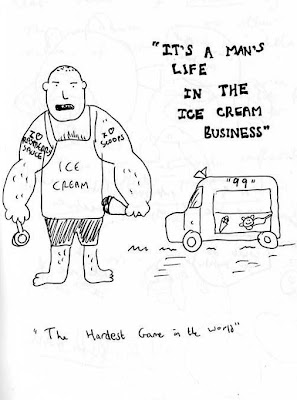 I want to do some kind of autobiographical comic about ice cream once I can decide how to do it.
Posted by rob jackson at 00:54 4 comments:

Here's a new review of 'The Gods Must be Bastards' from Rob Clough's 'High-Low' blog. Thanks Rob! I've still got copies for sale on my website if anyone wants one. They are £4, free postage to UK and Europe, add £1 for postage to the rest of the world.
Posted by rob jackson at 06:19 No comments: 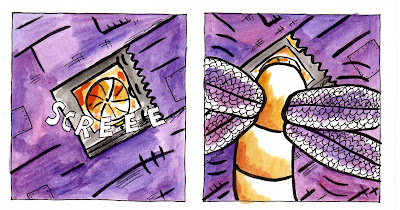 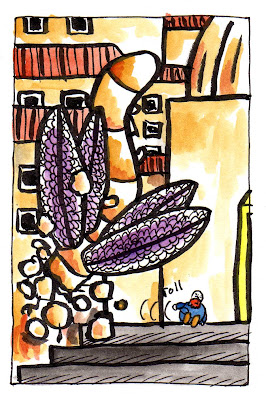 Here's a few panels from 'Flying Leaf Creature' as I don't want to give all the story away.
Posted by rob jackson at 02:38 2 comments: 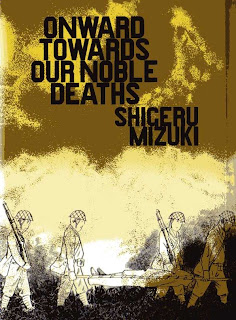 This is the first book by Shigeru Mizuki to be translated into English. That seems mad as they have been out in French for years, they even won a prize at Angouleme a few years ago. I hope his supernatural story books (like Non Non Ba) get translated next as I'd really like to read them. 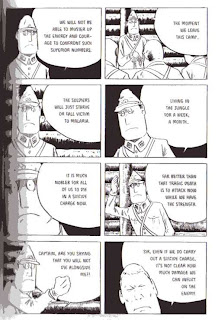 This book is the '90% fact' story of how the army unit that Mizuki would have been attached to ended up having to make a suicide attack in Papua New Guinea. Some of the men managed to survive and then were told that as their 'noble deaths' had already been reported they would have to go back and attack again, and this time make sure they all died. Mizuki had lost an arm and had malaria so had been sent to the hospital instead of to this unit.

It's a very very angry book. The army looks like hell. The newer rookie soldiers are constantly beaten and slapped, almost on every page. Even if they hadn't done anything wrong they are beaten at each rolecall. They are constantly starving hungry and mainly think about food.

The drawing is very strange in many ways. There are a lot of really detailed backgrounds but the people look more like Japanese gag cartoons. Each different soldier is drawn in a very different way, with a lot of cartoony-ness and distortion. It is from the 1970's. It takes quite a lot of getting used to, I had to read it twice through to follow the different characters properly. You can feel his rage with the commanders and the terrible waste of lives on almost every page. 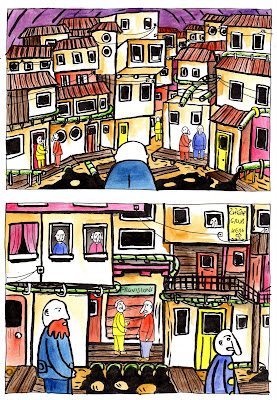 Here's the latest page of 'Flying leaf creature', my new comic. This is page 38 I think.
Posted by rob jackson at 02:09 No comments:

There's a new Comical Animal up today. I did a strawberry ice cream recipe for this one.
Posted by rob jackson at 01:58 3 comments: 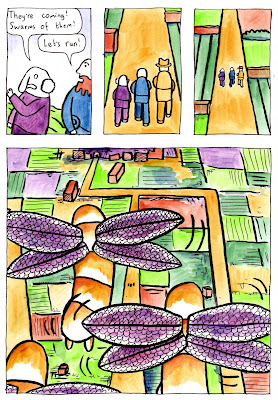