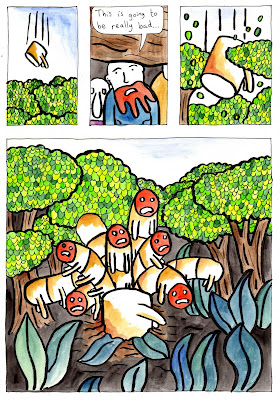 Here's a nice review of 'The Gods Must be Bastards' from Optical Sloth.
It's still available in my website shop for only £4.
Posted by rob jackson at 01:56 No comments: 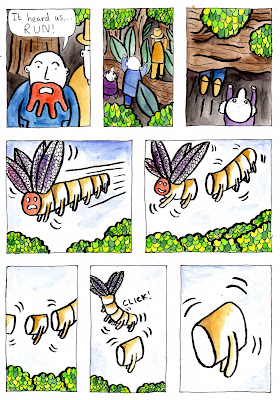 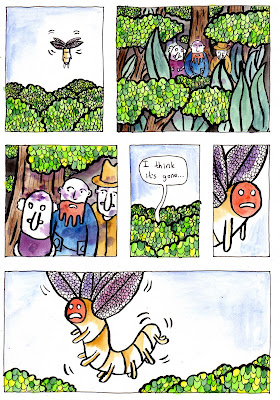 Here's a nice review of 'The Gods Must be Bastards' on the Forbidden Planet Blog.
Posted by rob jackson at 01:22 No comments: 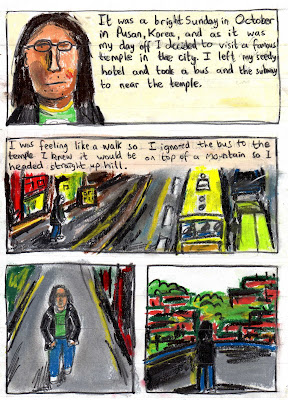 Trying out pastels and sellotape.
Posted by rob jackson at 03:45 2 comments: 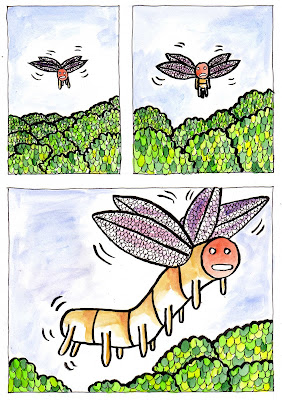 Maybe this will be a new story.
Posted by rob jackson at 02:12 No comments: There's lots of comics for sale in the paypal shop on my website if anyone wants any. Free postage in the UK and Europe, add £1 only for the rest of the world. 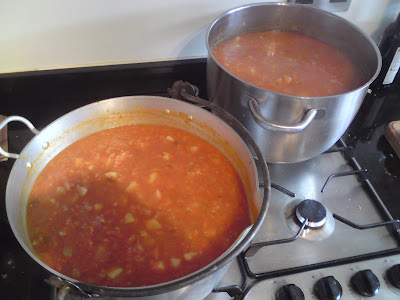 What have I been doing? I've mainly been making and selling soup and ice cream. Here's a photo of some of my soup. This one is carrot, tomato, potato, leek and onion. These are very big pans and I had to do this much twice, so it takes a long time. The food business is doing much better now as Spring is coming and people are leaving their houses to buy stuff.
Posted by rob jackson at 07:16 No comments: 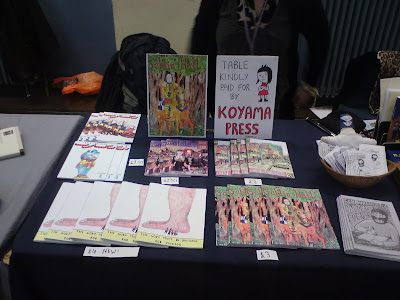 Here's my stuff on the table at the London Comic & Small Press Expo. I was sharing the table with Francesca Cassavetti, thanks Francesca! Also thanks again to Annie Koyama for kindly paying for my table!

It was a very nice venue with natural light and nice big tables and the show was very well run. It started very slowly though and I was getting worried but it really picked up about 3 pm and in the end I did well. I would definately go back to the show next year. Thanks to everyone who bought a comic! 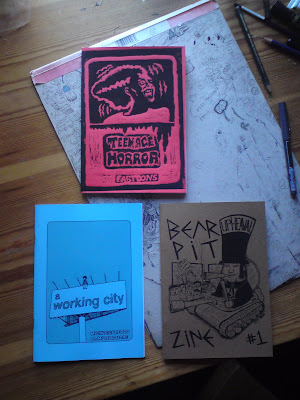 I didn't buy much stuff due to poverty. I got Francesca's new comic 'Teenage Horror' which is great and has individual lino print covers. Also Nick Soucek's new comic 'A Working City' which was good and the new Bristol based zine 'Bear Pit'.

I had to run off at the end to get to Kendal for my mates wedding do on the train. I made it as far as Preston but then the train I was on was badly delayed and I missed the last connection with a bunch of other people. Luckily the train people were very nice and helpful and sent us to Lancaster on another train and then paid for a taxi for me to Kendal, so I was only half an hour later than I should have been. Then I got drunk at the wedding do and had a dance. Next morning I got up and had a good full English breakfast and then travelled to Nether Kellett to sell cheese for an hour. My mum and dad were kindly running the stall the rest of the time. That went really really well and making money filled me with energy again. Then that faded away on the way home and now I am very knackered.
Posted by rob jackson at 03:16 No comments: 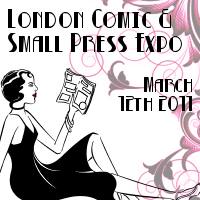 On Saturday I'll be at the London Comic & Small Press Expo. Should be cool. I'm at table 10 so if you are there why not come and see me. I'll have lots of copies of my new comic and all the older ones too. I'll be sat with Francesca Cassavetti, who also has a new comic. 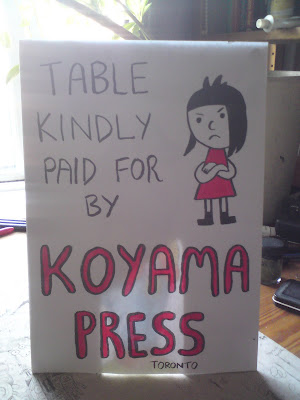 Here's the sign I've made to thank Koyama Press for paying for my table.
Posted by rob jackson at 01:52 No comments: 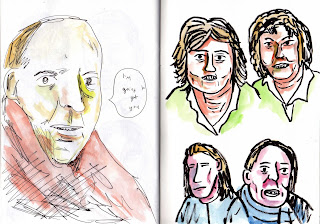 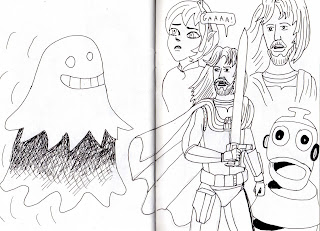 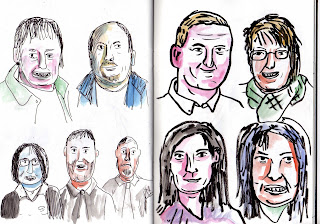 I don't know what to do for my next comic so I am filling pages in my sketchbook. Still trying to do stuff in colour. I hope I have a good idea soon.
Posted by rob jackson at 06:54 No comments: