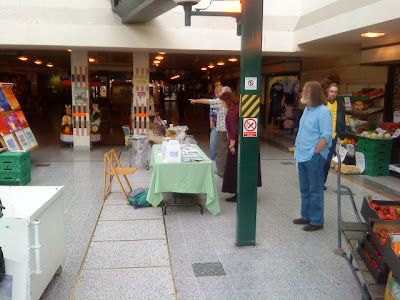 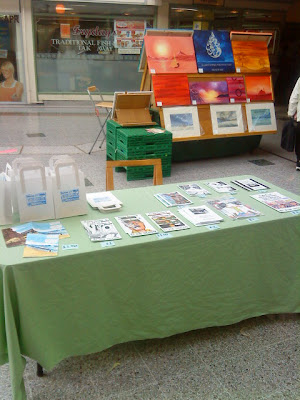 Look at the weird place my stall was, it's in the entrance hall of the market which is just like a shopping arcade. I had a fish and chip shop behind me and a fruit and veg stall in front. It was a lot different from being at a comics convention! It was sunny, well lit and well ventilated though. Most people seemed confused and baffled by the idea of comics, I could have done with a big sign saying 'COMICS!!!' but after going to mainly comic conventions before I hadn't thought of this. Didn't sell many comics, I sold three copies of 'Train to Shanghai' and a set of the 'Random Journeys' trilogy. This covered my costs (£5) for the stall and getting there and a cup of coffee so I broke even for the day. I didn't sell any copies of 'The Pasty Anthology' even though they looked very nice in their fancy bags. It wasn't very busy on the market, maybe everyone was outside because it's meant to be the only sunny day this week.
Oh well. I broke even and have learned that markets in the North West (even art markets like this) aren't very good places to sell comics. Many thanks to everyone who bought a comic, I hope you liked them!
Posted by rob jackson at 08:44

The fools! Don't they realise that a handmade limited edition comic is a far better investment than a picture of a ship made out of string and pins by children in the far east (I'm assuming there was a fair smattering of that type of merchandise). Still looks like you got the good spot out in the fresh air as the rest of it looks a bit subterranean (judging by your pics). At least you broke even – result!

Yes, i was happy to have broken even and it was nice to be out in the daylight. I might try another one near Christmas time, I'm not sure yet.