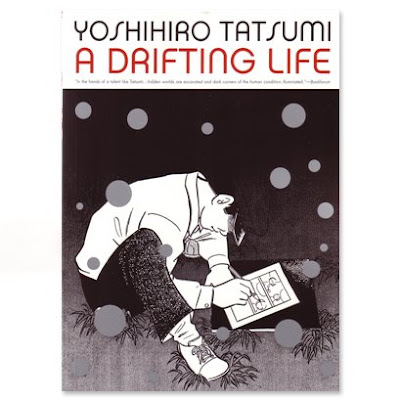 Wow this is a great book. It is my favourite book of the year, so far. 800 pages of autobiographical manga about a cartoonist, it’s like it was made specially for me…

It helps if you have some knowledge of the history of manga from the 50’s and 60’s, reading Fred Schodt’s excellent manga books and a few old manga classics will do, but I would recommend it to anyone else too.

I found it very inspiring. Sometimes really great books put me off drawing as they seem so above me in talent and storytelling abilities that I can’t compete, but this one made me do lots of drawing every night after I had been reading it. He has loads of troubles with his drawing and stories all the way through the book, and struggles with the choice between doing commercial work which will pay well and be popular and doing ‘important’ work, that is changing what manga is. He gets incredibly busy with work at various times, rushing about trying to meet his deadlines and satisfy his many publishers, who are all fighting and competing with each other. There is a lot of politics between the publishers and the different artists. The artists are all competing too, sometimes in friendly competition and sometimes as more bitter rivals. One thing the book doesn’t show is what most of his manga books are about, I guess a manga book about what’s in other manga books would be weird and boring, its much more about his life. And the Japanese audience could always go and look at his older books to find out.

I really like Tatsumi’s drawing style, it’s just right. I really hope there is a sequel as this books ends a long time ago and I’d love to see what he did next….
I hope I’m doing something like this when I’m in my seventies.