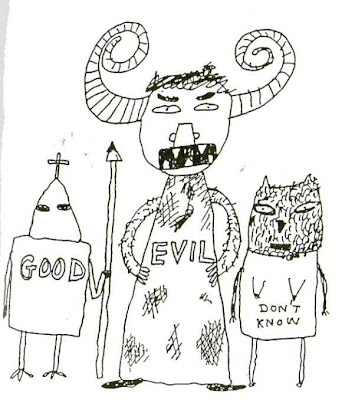 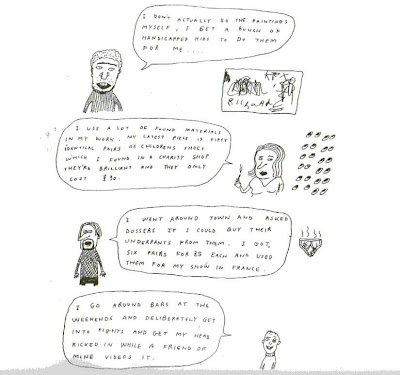 An occasional series where I talk about my influences, when I think of them.

I wonder what other cartoonists think about David Shrigley? Jeffrey Brown mentioned him once as an influence on his little gag cartoons from 'I Am Going to Be Small'. He is definately an influence on my work.

I first saw Shrigley's drawings at an art show about Comics and Art that I went to when I was at University. It must be one of the reasons I got back into cartooning at Uni. It was a very good show. He was in it and also was Adam Dant aka Donald Parsnips, who is also interesting. His drawings are very funny and awesome. I have seen many of them over the years in shows and his many books. They could have been small press cartoonists, but they're not, they are artists. I was getting a little bored with them, thinking he was carrying on in the same way, but then I saw some new stuff of his in the Cult Fiction exhibition which I saw in Carlisle. He had done some really good sculptures for it (one was of a giant felt snake) and an animation which was very funny, voiced by the actor Kevin Eldon. So he is keeping on trying and doing new stuff.

His website is at David Shrigley and is well worth a look...
Posted by rob jackson at 11:22