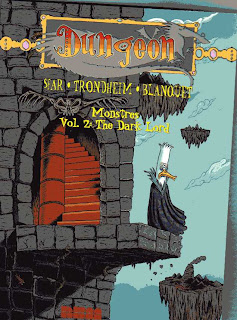 This is a very good Dungeon book, the best I've read for a while. The first story is drawn by Andreas, who I've never heard of before, and the second by Blanquet. They both draw the same scene in the stories, from the point of view of 2 different characters so it's fascinating to see the difference in their drawing, though they both have the same writers.
This book adds loads more details in to the dungeon story and does a lot of explaining about what's going on. Herbert the duck, from the first books, has now become an all powerful and evil dark lord, ruling with an iron fist, and has collected together all the seven objects of destiny, which we get to see in this book for the first time. I think you would need to read both the Dungeon Twilight books before this one though as it follows on from them two.
Posted by rob jackson at 11:39