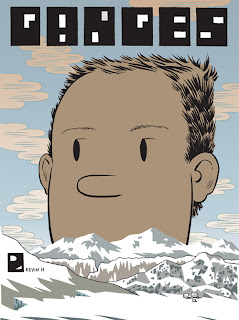 After reading ‘Curses’ I thought I’d better get some of the newer Kevin Huizenga books so here’s one of them. ‘Ganges 2’ has two stories, the first one is a quite abstract one. It’s a computer game type story with two characters playing a game Huizenga has invented called ‘Fight or Run’. They change their shapes in order to fight. It’s very beautiful with a lot of black ink.

The second longer story is about when Glenn Ganges worked at a dot-com company during the internet boom, the company is clearly doomed as it doesn’t really do anything like a lot of those companies. The employees stay in work till very late at night playing a computer shooting game called ‘Pulverize’. It’s a great story with a really good and clever ending that is very touching, surprisingly as the game is about blowing each others heads off with sniper rifles and rocket launchers. The artwork is again really great.
Posted by rob jackson at 04:00