What I Got on my Summer Holidays - Part 4 - Blutch - MITCHUM 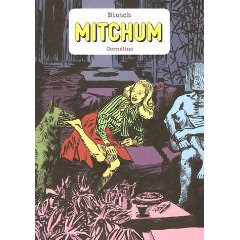 This is a very interesting book. It’s mainly wordless so I could read it all, but it is still hard to understand. The first two chapters (they were all printed separately at first as Mitchum 1 – 5 and then collected here) are about artists and their muses. Then Mitchum 3 actually has Robert Mitchum in it, and an evil malevolent Jimmy Stewart too in a weird little story about a police woman trying to save an unconscious woman from monstrous Hollywood stars. Mitchum 4 has a kind of trashy all female western in the background with beautiful inky drawings of ballet dancers superimposed over the top. Mitchum 5 is a story apparently by the Brothers Grimm (I had never heard it before) starring a bear in some tribulations. Then there is a bonus section at the back with Man Friday and a female explorer (I think?) on on a desert island.

All the drawings are lovely, they are really inky and all done in brush strokes. I have heard of Blutch before a couple of times, in an interview with Craig Thompson in the Comics Journal, and in the Maybe Later book below cos he shares a studio with Dupuy. They are very French looking, a bit like Baudoin’s stuff too. There are a lot of trashy Hollywood / girl fights motifs in the stories as well as some fine art stuff.