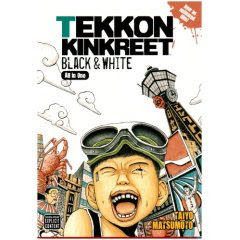 Tekkon Kinkreet is another massive book. I keep buying these giant tomes recently, they are very good value for money. The stories pretty good, about two orphans living and trying to survive in a city called 'Treasure Town' which is a bit like Tokyo or more like Osaka. They are fighting Yakuza but really fighting a giant corporation which is trying to take over the city and remake it into a kind of corporate disney-land. The great thing about it is the drawing which is awesome, all spindly wobbly line people. The city also looks amazing and is the main character of the story really. Matsumoto constantly uses close up panels of the characters great big heads with their small spindly bodies in perspective going away below which gives the book a special feeling of being right up in their faces. The drawings more european or indie comics looking than usual manga. Well worth gazing at and trying to work out how to make such a cool city.
Posted by rob jackson at 04:48