Comics I Got at the Bristol Comics and Zine Fair 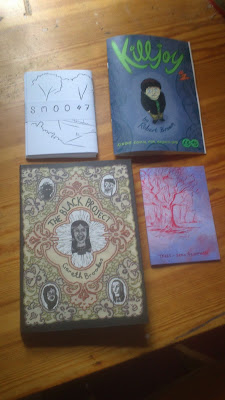 Here's the four comics I got at the Bristol Comics and Zine Fair on Saturday. I was going to go round again at the end and get some more but I was very knackered, there was loads of other great stuff on sale.

There's Simon Moreton's 'Smoo #7' which is a set of three little mini comics about the small village he grew up in. You can read them in any order. They are really good. Here's a proper review of them from Andy Oliver at Broken Frontier.

Robert Brown's 'Killjoy #2' is great, I really liked the first issue too. This time he tells a group of short stories from his childhood. I especially liked 'Watershed' and 'Lost and Found' where he gets lost in a shopping centre from his dad, I can remember getting lost like that once myself.

I got Gareth Brookes 'The Black Project'. I really enjoyed the minicomic of the first part of the story he brought out a while ago and the book carries the story on really well. Highly recommended and I really liked how it ended.

Also I got Sean Azzopardi's lovely sketchbook called 'Trees', which has some really good drawings of trees from London and Angouleme.
Posted by rob jackson at 03:13