Dupuy and Berberian - Get a Life 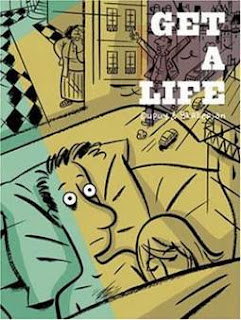 Last summer I read the authors book ‘Maybe Later’ where they talk about all the problems and questions they faced while making this book so I thought I’d give it a read too. It’s very good, lovely drawing. You can see the bits they have done from their travel sketchbooks in the section where the hero goes to Lisbon. It’s made up of short interconnected stories which surprised me as I was expecting just one long story for some reason.

It’s a slice of life story from the life of the main character Monsieur Jean, a thirty year old writer living in Paris. In this book he turns thirty, meets publishers, goes to Lisbon to a literary festival and has trouble with his concierge in the apartment he lives in. It all must be very autobiographical from the lives of Dupuy and Berberian.

I do think I liked ‘Maybe Later’ better than this book, which seems strange as that is a kind of ‘making of’ book of this one. It would be weird with a film if you enjoyed the ‘making of’ documentary more than the actual film, but I think ‘Maybe Later’ is very interesting to cartoonists having trouble with their work and thinking about what they are doing.
Posted by rob jackson at 05:47