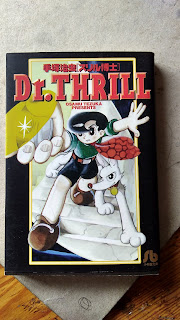 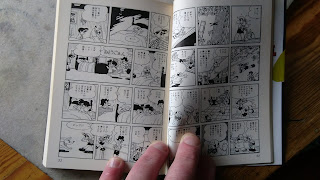 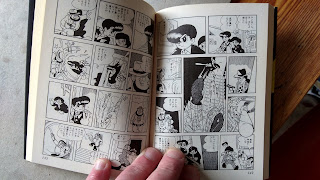 Here's a classic Tezuka series from 1959. There's a boy solving mysteries and having adventures with his faithful dog, which saves him from lots of cliff hanging style dangers. It's got all the classic characters in it, like Inspector Mustache and lots of others I recognise but don't know their names. It's a good silly book.

Here's a bit of whats going on from the proper Tezuka book review site - "Along the way they encounter an evil group of assassins that plant a time bomb in the belly of a foreign dignitary in an attempt to kill his prince, and the leader of a gang of narcotic smugglers who dresses like a giant insect and hides their wares in honeycombs.  They duke it out the Black Tengu gang for possession of a treasure, come to the aid of a young boy with insomnia who witnesses a murder.  They even get kidnapped by an evil gang of international conspirators – and that’s just the beginning!". Cool.
Posted by rob jackson at 01:29