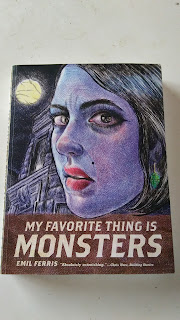 I bought myself this book for my birthday as it had been top of loads of peoples 'Best Comics of 2017' lists. It's massive, 386 colour pages, and it's only the first part of the story. It's set in 1960's inner city Chicago and has ten years old Karen trying to solve the murder of her upstairs neighbour, the mysterious Anka Silverberg. She is the beautiful woman on the front cover. Karen loves monsters and nearly always draws herself as a werewolf. While she is detectoring she puts on a trench coat and hat, as a werewolf detective. The chapters in the book are separated with copies of pulp horror magazines, most of them seem to correspond indirectly with the story. The whole book is made to look like a spiral notebook that Karen is drawing in, there are holes for the binding, and the whole thing is on lined paper. 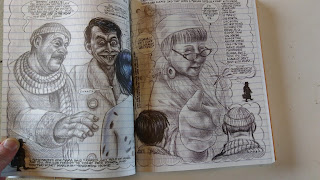 There is such a lot going on in the story. Karen finds tapes made by a reporter who met Anka where she tells the story of her horrible life. She was Jewish and born in Berlin in the 1920's. Her mother worked in a brothel where Anka lived too, and later sells her into child prostitution just before the Nazi's rise to power. The book also tells what Karen finds out about the people around her, her mother, her brother Deeze, the other people who live in their apartment block and her few friends . It's very grim at times, there is a huge amount of bad stuff going on and I feel it could all end up very badly for the characters. The Chicago Art Institute is also very important to the story, as it is Karen's favourite place. There are lovely drawings of the paintings, and Karen can crawl right into them and find things out. 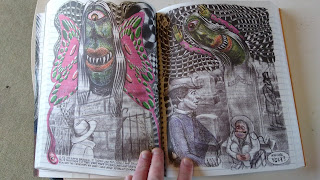 The drawing is very very beautiful. There are lovely really lifelike portraits and drawings of all the characters on some pages. The drawings of Karen's mother are especially great. On others it gets much more scribbly and loose with little panels, whatever is best for the story.  Some of the crosshatching is amazing, all done with coloured biros and pens. 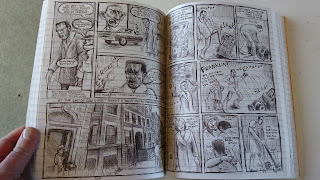 I really enjoyed this book and would tell anyone to buy it. It's a lot of money but it's a massive book and well worth it. I reckon I will be able to read it a lot of times and notice a lot more stuff each time. I'm going to get part two once it comes out, though I am worried for the characters.