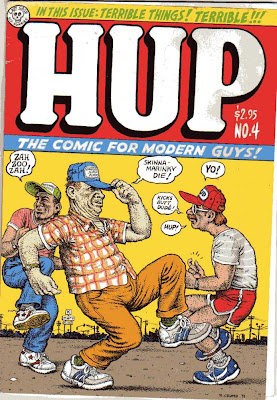 I'm feeling somewhat depressed at the moment, what with the DFC getting cancelled, just heard today that Ted May has stopped doing anymore of his Injury Comic which I always enjoyed due to the new Diamond disribution minimums, and the crappy economy in general, so I thought I'd talk about an old classic by Crumb.

I often forget just how funny Crumb is in his later stuff. In this one he's like a classic comedian on top form with his humour. It's got the headless devil girl story in too (as seen in the film Crumb). All the other stories are really funny and brilliant such as Crumb going to the Academy Awards (see, it's funny already) to cover them for Premiere Magazine, and 'You Can't Have Them All - Magnificent Specimens I Have Seen' (another of his 'Troubles with Women' series). Also you get Crumb's take on religion in 'Can You Stand Alone and Face up to the Universe'. Even the Mr Natural stories are pretty funny in this one and they are my least favourite of Crumb's stories.
Posted by rob jackson at 10:41