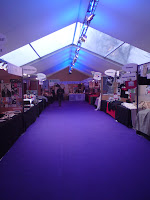 View down our tent when the exhibition hadn't opened yet. Once it opened it was busy all the time. The Saturday was insanely busy, even the streets of the town were totally rammed with comics people, it was very difficult to walk anywhere. 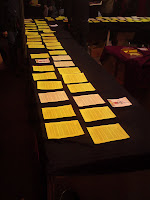 L'Association were on strike and so had all these leaflets out in their booth instead of selling anything. 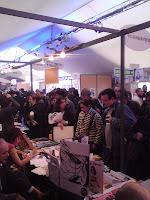 People when the tent was open. Our tent was bigger than any of the UK conventions, and was only one of six or seven tents... 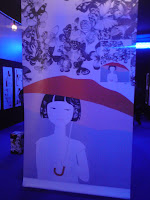 Picture from the AX Manga exhibition in the big publishers tent. Shame there were no originals in it, only blown up pictures. 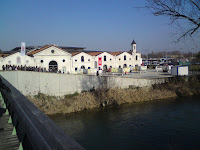 Hi Rob,
I bought your comics about Bolton in Angouleme and told you I did the same kind of work in a book.
Gimme your postal adress, I'll be pleased to send it to you!
Cheers,
vincent.vanoli@free.fr

Thanks Vincent, I'll e mail you it now
cheers
rob

I'm so glad it lived up to your expectations. Dan, Sean, Sally Anne and I met at the Comix Reader party last night, slightly less exhausted and still fired up with enthusiasm.

I am all enthusiastic too now I've had some sleep. I have had two new ideas that I'm going to get started on in a few days once I've thought about them some more. I was getting really stuck in a rut with my comics so its great to think of new possibilities. Thanks again for all your work!