What I Have Been Reading 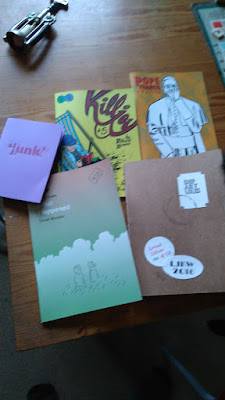 Here's the comics I have bought or swapped recently. I haven't been to any shows for ages but I'm still keeping up with cartoonists I know.

Paul Rainey's 'Pope Francis Goes to the Dentist' is a collection of the short stories and satirical comics he has been drawing. They are very good. The 'Pope Francis' stories are very funny as he tries to go about his papal work while worrying about his teeth. I also really like the '14 Year old Stand up Comedian' tales.

Robert Brown has brought out 'Killjoy 5', the penultimate issue of his series. It's a good story about going to Bournemouth with his grandparents. It sets up the last part of the series really well. It made me feel old though as he goes there in 1997, and is still at primary school. I was at university then.

Lydia Wysocki has brought out 'Departures' and 'Junk'. 'Junk' is a cool little collection of sketchbook and diary comics. 'Departures' is a very fancy handmade comic which opens two different ways, one way is a comic about travelling, with many airports. It is made from remixed and cut up travel sketches. The other way is sketchbook drawings from her travels. The drawings are really lovely.

Simon Moreton brought out 'What Happened' from Kilgore Books. It is some very nice poetic comics about childhood. Watching a scary film, wandering in the woods and on the beach, having a fight with a friend and sitting in a parents car listening to music.
Posted by rob jackson at 00:58 No comments:

Here's a vintage bus from my new comic. I'm up to page fourteen now.
Posted by rob jackson at 00:43 No comments:

Hurray, Rob Clough has wrote a new review of my recent comics. He reviews all four issues of 'Flying Sausage Academy', 'Ragnar the Cheesemonger', 'RhiZome 3' and 'RhiZome 4'. Thanks Rob! All the comics are on sale at my website and my Comicsy shop.
Posted by rob jackson at 03:23 No comments:

Another row of panels from my new story. I walked into town in the rain and bought more paper so I've got going again.
Posted by rob jackson at 00:38 No comments:

Another row of panels from page eight. I've been on holiday in Berlin this week but I'll get back to drawing this on Monday.
Posted by rob jackson at 00:22 No comments:

Here's another row of panels from my new comic. I'm up to page eight now.
Posted by rob jackson at 01:07 No comments: