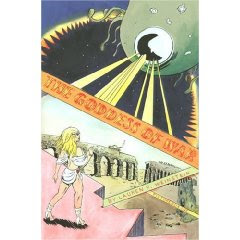 The Goddess of War is very good. Lauren Weinstein did those 'Inside Vineyland' comics, which I have never read but often saw in the Comics Journal and now she's started this awesome series. It's about an ex valkyrie who has been made the Goddess Of War by the mysterious no. 2. Her job is to spread war throughout the human world, in this issue she is meant to go meet a suicide bomber and inspire him to blow himself up. She has a bad day and feeling lonely and depressed pulls a sickie. She thinks about the time she fell for a mortal, Cochise the Apache, and tells his story. The drawing is very good, looks like scratchy old printing or something, its very interesting. Also there are lots of great pencil or charcoal splash type pages of the Goddesses Trophy Room, and other important places in the story. It's very funny too. Well worth getting, I'm looking forward to part 2 to see where this story is going...
Posted by rob jackson at 04:11 No comments: 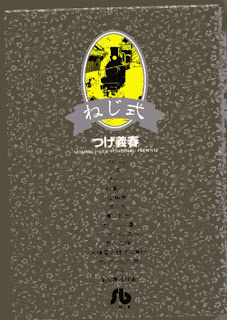 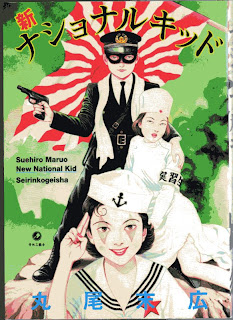 Yoshiharu Tsuge - Nejishiki
Why has no one published a full book of Tsuge in English yet? This is a great book, it's got his most famous story in it 'Nejishiki' or 'Screw Style' which has come out in English in an issue of the Comics Journal. The other stories are all great too, some are surreal tales, some autobiographical slice-of-life stories about wandering in the countryside and meeting people, some horror and some historical tales. He has a really wide range and I love the drawing. If an English book ever comes out I shall buy it straight away....

Suehiro Maruo - New National Kid
What an awesome cover eh. Maruo's drawing is amazing. I'm not as keen on him as I was a few years ago, but I am less keen on shocking type stories these days as I was when I was younger. Maruo loves the aesthetics of the 1930's and all the stories of his I've seen have looked like that. This one has 'Planet of the Jap' which is an alternate universe story where Japan has won World War 2 and is based on the Philip K Dick story, 'The Man in the High Castle' though it has nothing from the story in it, except the idea. A few of his books came out in English 5 or 6 years ago but nothing since then, maybe they didn't sell. There's also a very weird story with Michael Jackson in it and a lot of Cronenburg style body horror. It's all very sick, but with beautifull draughtmanship.
Posted by rob jackson at 07:05 1 comment:

Not so long till the Birmingham International Comics Show now...
I need to do another 6 or so pages so I can have a new comic to sell there. Should be able to do it in time as long as I can come up with some good ideas.... I was a bit disappointed with this great big manga book, it sounded really good from the reviews I'd read before I bought it. I guess I just wasn't in the right mood for it so I'll try it again in a few months. It's very arty, the drawing reminded me a bit of Tsuge who I really like, but the story just didn't work on me at all. It's about a young bloke and his girlfriend trying to survive while he tries to get a career in drawing manga in the 1970's. It's very minimally drawn, with loads of blank space and nearly all the faces missing. They are both very torn by emotion all the time, but can't manage to express anything of it to each other. Reminded me of one of those really really slow Japanese film's that spend hours and hours showing shots of the background while people slowly move around feeling sad.
Posted by rob jackson at 04:36 No comments:

What Am I Doing?

Not much really, waiting to have some good ideas....
I have finished Math-Ro-Mancer, it's three pages long and I'm happy with it. Nice ending. Also I started a new one page story called 'Rob Jackson's Rules of Life no. 6', not sure how that'll turn out. I went to the Manchester Comix Collective Drink and Draw 7 and we drew a four page jam comic which was cool. You can see it here-
ComiX Jam
Posted by rob jackson at 05:09 No comments:

Labels: what am i doing

This is the third of a series of Tatsumi books from Drawn and Quarterly. This ones a good one, the first 'Abandon the Old in Tokyo' is awesome but the second was a bit disappointing to me. They all are very similar really in tone, and that tone is super depressing, sometimes so dark that its funny, though the drawing gets better as you go through them. I really like the way he draws women. D & Q aren't going to do another of these, instead they are going to print his vast autobiogrpahical book about being a manga-ka, so i've heard, which should be great. I'm not sure why you would need all three of these books anyhow, i think I have mainly got them all as they look so nice all together on my shelf. Just get the first and this one...
Posted by rob jackson at 05:03 No comments: