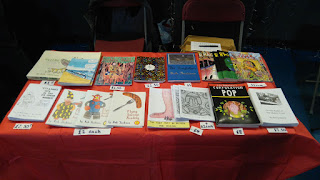 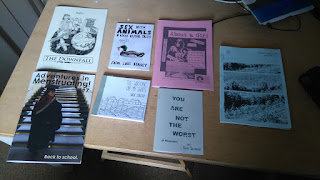 I got Simon Moreton's 'Minor Leagues #1' which is Simon's new zines / comic project, Nick Soucek's 'The Writing on My Shoes' which I have read now and is very good, 'The Downfall' by Brunez, 'Sex with Animals' by Jacob Louis Beaney, 'Adventures in Menstrating #7' by Chella Quint, 'About a Girl #1' by Sam Duffy and 'You are Not the Worst' by Doug Jensen. I'm going to read the rest of them soon once I recover from the weekend. I had markets on Sunday and Monday after the zine fest so I'm knackered now.
Posted by rob jackson at 23:59

You've a lot of books out now Rob! Sounds like you did well but a busy time with the other markets, which do you enjoy more the comic fairs or food markets or is that a silly question?

Well, the two food markets I did were on Sunday and Monday and it rained and was freezing cold and very quiet, so I enjoyed the comic fair a lot more.

I did take a lot of books, I never know which ones will sell. I sold some 'A Handful of Groats' and a 'Goblin Hall' and I haven't sold any of them for ages.

Can sympathise with the stock dilema, no rhyme or reason sometimes but good that the older stuff still sells. I guess we forget that there's always someone there who's seeing the books for the first time :)

This last weekend was a load better, I sold lots of ice cream and sat around in the sun all day.

An outdoors comic festival would be nice, except for the possible rain and wind.