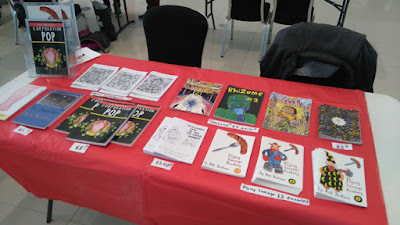 I did alright at RobotCon in Sheffield yesterday. The trains and travelling were nice and easy though I had to get up early so I could walk into town. It was a nice sunny day. The venue in the Millenium Gallery in the middle of Sheffield was a very good space, lots of light and room. The show was well organised and there was a decent crowd. I broke even on the day with my table costs and travel so I'm happy with that, I would have liked a few more sales but it was the first time the shows been on so thats fine. I sold nearly all my comics to people I don't know, unlike at Leeds Thoughtbubble where nearly all my sales were to cartoonists I know, and thats a lot better. There were loads of children at the show so if I go next year I'll take something child-friendly to sell to them or their parents. Russell Stearman,  Joe List and Ed Syder had tables so I got to catch up with them.  Thanks everyone who had a look at my stuff or bought everything!
Posted by rob jackson at 01:43