I'm writing little review things for the comics I got from Thoughtbubble this year. Here's the first two, I haven't got round to reading a lot of them yet. After Thoughtbubble I had to have a week without any comics at all, but now I have started drawing again and feel better about comics. I have even had a new idea, but it needs some work yet. I only have one idea so far and I like to have four or five and then squish them all together. 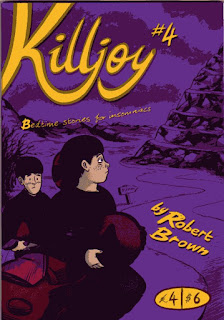 Rob Brown's 'Killjoy #4' was great. It's the fourth in this series telling stories from his childhood. I think the issues are coming out faster now, which is good. There are six stories of different lengths. My favourite was 'After School...' where he and his brother are round his grandparents house and pretend to be asleep in order to get carried home by his mum. There's a nightmare story too which gives him the chance to draw lots of motorbikes in a much looser way. The drawing there reminds me of seventies action manga. 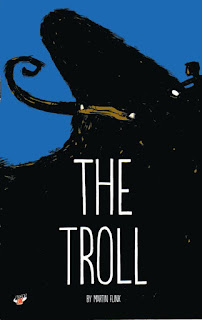 Martin Flink's 'The Troll'. This is a silent comic published by Accent UK. The drawing is really good. It's the story of a little boy staying on holiday with his parents, in a cabin in the woods. He wanders off to play and finds a troll. It's short but beautiful, and all in colour too, with very nice Scandinavian landscapes.
Posted by rob jackson at 01:23

Hi Rob, thanks for the kind words on The Troll, glad you liked it. I've not made much of a dent in my Thought Bubble reading yet but looking forward to reading Corporation Pop especially. Good luck with starting a new project, it's always the exciting and scary bit!

Thanks! It's always hard to decide which way to go on a new story.