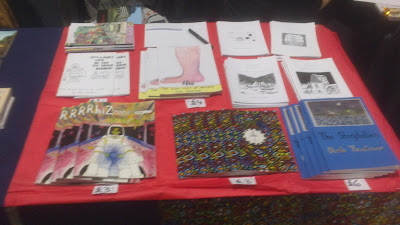 I really should have taken some better photos...  here's a boring one of my stall.

The Saturday at Thoughtbubble started very quietly as usual for sales, I was getting worried but then I had ten good minutes of sales. They were the best ten minutes I've ever had. I sold lots of my 'Storytellers' book which was nice. Thanks everyone who came and bought something! After that it went quiet again but I was happy, thinking that maybe Sunday would be good too, like it was for me last year.

I had a good night out with everyone on Saturday night and woke up Sunday very hungover and sleepy. Sadly Sunday was really really quiet, so in the end I sold less comics than last year. I just sold some comics to other cartoonists near the end of the day, thanks cartoonists!

I think that as the convention had got so much bigger the money was more spread out between the stalls. There didn't seem to be any more customers than last year, just more stalls. In the end it was ok, I met lots of people and had a good laugh, but didn't sell enough comics.

The train home was easy luckily, I got a seat all the way for the first time ever. But now I have come down with a nasty convention cold, never mind. Luckily I've got a few days off now.
Posted by rob jackson at 05:59

Hi Rob, great catching up with you when we could at the show.

Yea the Sunday was slow for everyone and with so many stalls, I think folk were pretty much spent up by the Sunday.

I look forward though to reading your new books, always good to get a couple of new ones from you.

Thanks for buying my books Colin, I hope you like them!