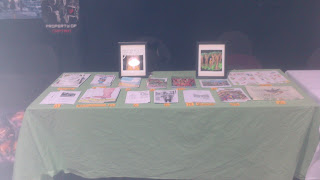 Here's the obligatory boring photo of my table at Leeds.

I got up very early as usual and got the train to Leeds on the Saturday morning. The Saturday was very slow for sales for some reason so I got a bit worried, but luckily the Sunday went great and I sold more than twice as many comics as on the Saturday. In the end I had the best sales of any Leeds Thoughtbubble I've been too. So that was great and I'll definately be back next year with more comics. Thanks to everyone who visited my table!

It was great meeting everyone again as it's only the second convention I went to this year. Hopefully next year I'll get to do a few more. 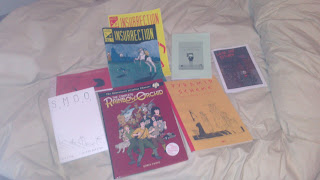 I got some really great comics this year. Here's a photo of my haul. I'll write more about them later once I finish reading them all. They are 'The Complete Rainbow Orchid' by Garen Ewing which is a beautiful looking book. I'll read it very soon as I've only read the first two books in the past.  'The Un-Manned Manned Craft' by Nick Soucek. 'Same Day Return' by Sean Azzopardi, which I really enjoyed. 'Insurrection no. 1 and no.2' by Russell Stearman. 'A Corner of Paradise' by David O'Connell which is really good. 'Smoo Comics no.6 ' by Simon Moreton. 'Pyramid Scheme and Other Stories' by Lando.
Posted by rob jackson at 02:13

Labels: convention report, leeds thought bubble, what i got at leeds