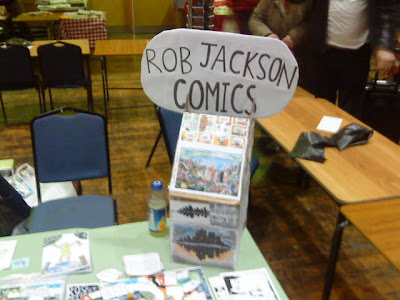 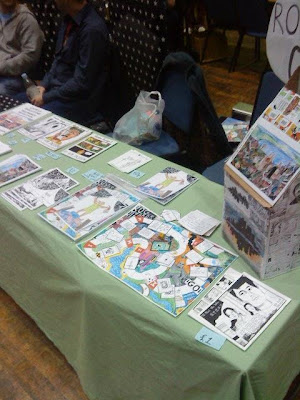 Here are the obligatory table shots from the thing last Saturday. The first one shows my 'Cardboard Wonder' table decoration which also came with me to Leeds. Sadly it broke after this Thing and I had to throw it away. The real shame is that it was only two days away from retirement....

I had a good time at the thing, I was on table 18 next to Francesca Cassavetti, Sally Anne Hickman and Richy K Chandler. The problem was that I had poor sales and only sold 8 comics. Don't know why. I didn't sell a single comic till 1pm by which time I was getting somewhat desperate. I bought some good comics which I'll mention here later, I would have bought more, but I was planning to spend my earnings on them and I didn't make any. A lot of people said how nice 'Bog Wizards 2' was with it's board game, but no one bought one.

Afterwards I went to Schmurgencon in a pub down the road for a few pints of Stella and then got drunk with my brother, and went for a nice curry. I also popped by the Post Thing Thing and had a few beers there and saw a few people.

It was a very good weekend except for the disappointing sales.
Posted by rob jackson at 10:01

Hi Rob, I was exhibiting as well and I'm gutted that I didn't see your table there and get to say hello to you. When I'm at these things, I try not to leave my post for too long so my circle of the hall in the afternoon was very, very cursory. I'm sorry that you didn't sell more comics. Hopefully, at the next one of these things we'll get to meet.

Hi Rob, glad everyone liked Bog Wizards two, I'm sure they were kicking themselves afterwards that they didn't have an amusing board game for the journey home. Your table looked very nice by the way.

thanks paul, i didn't have time to come round your table either, i'll try and come and say hello next time.

hi s
thanks for saying the table looked nice, i think it was a bit messy. i am going to try and find a more exciting table cloth for the next one. with gold and shiny bits on it hopefully.

Glad to see Candy or Medicine at a table across the pond.

Sorry about your poor sales. I've had similar experiences setting up at shows. The whole "This looks really cool" but no purchases thing.

thanks josh, I did manage to sell one copy of Candy or Medicine.

I had really good sales at my last show so I guess it's just random.