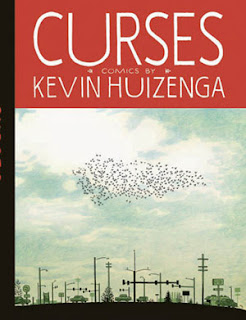 Woah this is good. It has the best of Kevin Huizenga’s stories from a bunch of different older anthologies in it ‘Green Tea’, ‘Curses’ and ‘Jeepers Jacobs’. He’s done some newer stuff since that sounds great but I haven’t got round to reading them yet. It also has the strange story ‘28th Street’ where Glenn Ganges goes to steal a feather from the feathered ogre that secretly lives in the downtown shopping center area so that his wife can have a baby, and the great story ‘Curses’. ‘Curses’ is about how starlings were introduced to the USA where they have formed immense flocks which cause loads of damage as they fly around. Also it tells how they are gifted mimics and make the urban sounds of cars, alarms going off and trains.

All the stories star Glenn Ganges and they all interlink in various ways, it’s very clever. The cartooning is lovely looking, I especially like the way he goes all abstract sometimes and breaks down the drawing into lines and shapes. I remember seeing him do this before in one of his minicomics I own. He doesn’t do it very often, only when it’s important to the story. There are some great pages of strip malls and shopping centres at night and in the rain. This is one of my favourite books I’ve read this year, and one I will read again a bunch more times as it’s nice and dense. Also I am very keen to get his newer comics.